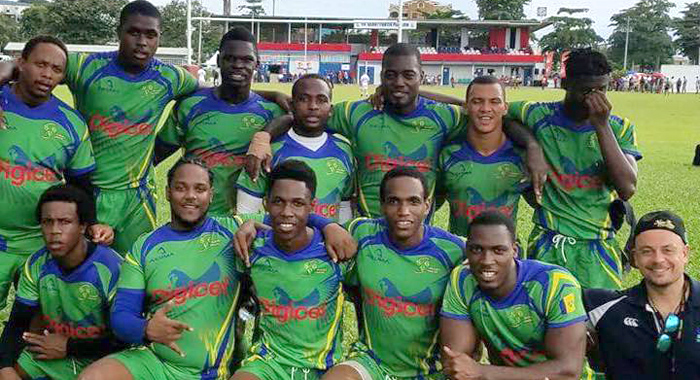 The SVG rugby 7s team has returned from Trinidad defeated but in high spirits after a tough Rugby Americas North (RAN) 7-a-side Tournament.

The tournament, which featured 24 teams and 68 games, saw St. Vincent starting off in a difficult group with Mexico and Trinidad. The first day of the tournament, on Nov. 12, the team was defeated 52-0 by Trinidad and 25-0 by Mexico, but played well against the much stronger teams.

Day 2, Nov. 13, started with another tough opponent, Martinique who won 28-0. Next was Curacao, who SVG beat when they last met, but Curacao got their revenge as they beat SVG 5-14. The last game of the tournament was against Turks & Caicos who won by a try 21-15.

Although returning home with no wins under their belts, the president was pleased with the team’s performance.

“I’m incredibly proud of the boys, who gave the tournament their best shot, against really tough opponents. Yes, we didn’t win any games but the players represented St. Vincent to a high standard by the way they behaved, carried themselves and respected those around them.

“We sent a fairly young and inexperienced team to Trinidad, mixed in with some very experienced players and they should all be proud of their achievements. This tournament is further proof that we need a full-time national coach if we are to up our standards to be able to compete in our region. Every team who attended had a full-time coach and it really makes a huge difference.”

Next, the team will finish off the 7s league before the Christmas break.

In the New Year, the Rugby Union will switch to 15-a-side rugby, playing the league and training in preparation of the RAN 15-a-side competition.