Eustace’s family proud of his stint as opposition leader 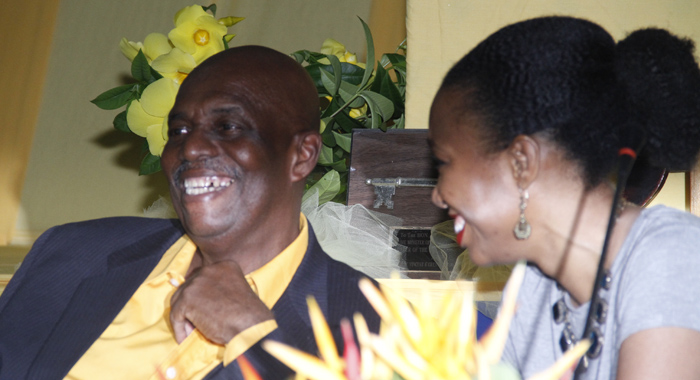 Family members of immediate past Leader of the Opposition, Arnhim Eustace, have expressed pride in his conduct in that capacity during his 16-year stint.

On Monday, Godwin Friday, Member of Parliament for the Northern Grenadines and one of the vice-presidents of the main opposition New Democratic Party (NDP), replaced Eustace as opposition leader after Eustace decided to relinquish the post.

On Sunday at the NDP’s extraordinary convention, Eustace will also give up the presidency of the NDP, which he has held since October 2001.

In calls to his last weekly radio programme on Monday as president of the NDP, Eustace’s wife and his children paid glowing tribute to him, describing him as a principled and stabilising force in St. Vincent and the Grenadines over the past decade and a half.

In her call, Eustace’s daughter, Maia Eustace, a lawyer who campaigned with her father for the 2015 general elections, addressed him initially as “Daddy”

“But let me first address Arnhim Eustace. I am immensely proud of Arnhim Eustace, the political leader and Arnhim Eustace in particular, the moral leader. By my estimation, he has been the moral leader of St. Vincent and the Grenadines for at least 16 years, and he is, therefore, one of its parents. And his has been a record of public service indeed, and, also, public achievement,” Maia said.

She said she has seen, on many occasions, that he has taken decisions that have served the greater good while not necessarily securing himself.

“He deepened the democracy in the party and would take a pass on some issues when he felt that, while politically there would be an advantage, there would be many innocent people who would be unfairly impacted,” she told listeners.

Maia quoted the saying that until the lion writes his own history, tail of the lion will always glorify the hunter.

“I feel that applied there.”

She also echoed the NDP’s claims that the ruling Unity Labour Party stole the last two elections, saying that on at least two occasions, 2010 and 2015, the majority of Vincentians voted NDP and voted with Mr. Eustace in mind as prime minister.

While Eustace has relinquished his posts as opposition leader and NDP president, he will continue as MP for East Kingstown, which he has been representing since 1998.

Maia said that sharing her father with her country has been a sometime frustrating honour.

“I look forward to the family life that we would have now; now that he will be bowing out of politics. Well, not politics in full but now that he will be scaling down on his duties. Daddy, I can’t wait, because we have so many plans. You might not want to engage in all of them, but you won’t have much of a say,” Maia said. 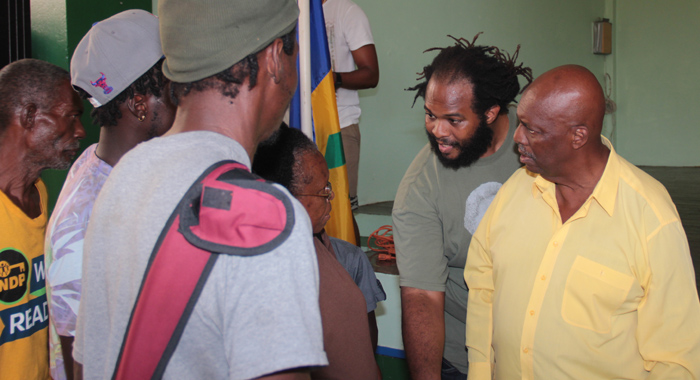 Arnhim Eustace, in yellow, and his son Ajene Eustace, with dreadlocks, interact with persons after an NDP press conference last December. (IWN photo)

Mr. Eustace’s son, Ajene Eustace, who is based in the United States with his family, also called into the programme to pay tribute to his father.

“I’d like to offer my sincere thanks and gratitude for your leadership over the past decade and a half.  It has been so refreshing to have such an excellent combination of integrity, honesty and vision in such a highly visible leadership position in St. Vincent,” Ajene said.

“You have been a voice for the voiceless, a champion of the victimised and, for me, you have embodied the hopes and aspirations of the entire nation.  We will not forget your staunch defence of democracy; it’s known and admired across the region, with states like St. Kitts and Nevis directly benefitting right now.”

Ajene said his father has “always chosen to do the right thing, as opposed to the easiest thing and you have never given a second thought to any personal benefit and we love you for it and will never forget”.

Ajene said that as a little boy, he, like many children, he saw his father as  a superhero.

“I saw you as the strongest man in the world. As a man now, looking at you over the past 16-odd years, I know you can’t jump a building in a single leap but I am still in awe of your strength of character, you have borne the onslaught of all types … and you have always stood tall and I appreciate you.”

“I’m excited that the hard work is going to ease up a little bit because your grandchildren will be able to see you at the end of the day.  Again, thank you so much, Daddy. And, I love you,” Ajene said.

And, in a call to the station, Arnhim’s wife, Jennifer, who has shied away from the limelight of politics, said she just want to want to add her voice to her children’s “and to welcome their father back home fully and to his new job as a farm hand, beginning Monday morning”.

She was speaking light-heartedly about Arnhim taking up a position at her farm, which she began running some years after being fired from the state-owned electricity company, VINLEC, sometime after he became opposition leader.

“I just want to say that we are very proud of him. We have never been ashamed of him politically. There have been no rumours about him, his reputation has not been tarnished by any unmannerly behaviour; his Christian upbringing has shone through throughout the period, his concern for poor people, his caring for children in particular,” Mrs. Eustace said.

In his final address to the NDP and the nation as party leader Tuesday night at Democrat House, the NDP’s headquarters, Eustace paid tribute to his children and grandchildren, saying, “I say I will make up to you all the time lost to distance and discipline.”

He also wished a “blessed 11th birthday” to his first grandchild, Ayinde, who was celebrating that day.

“Daddy is very proud of you,” Eustace said, referring to himself by the name that his children and grandchildren call him.

To his wife, who was in the audience at the event, Eustace said:

“To my wife, Jennifer Maureen Eustace, who likes neither fanfare nor public recognition, I recognise you publicly now and very late. Because your husband entered politics you lost your job as financial controller of VINLEC. Comparable vacancies at other institutions were few and far between, and when they did arise and you applied and were the most qualified, you were told the company had decided not to fill the position after all. But you did not withdraw and fade away. Instead you went into agriculture, from banana to orchids, co-founded a co- operative of farmers, and did a Master’s Degree in theology. You have been my confidante and fiercest defender, all the while keeping our family tightly knit. I admire you. Jen, you will never go gently into that good night. And because of you, neither will I.”