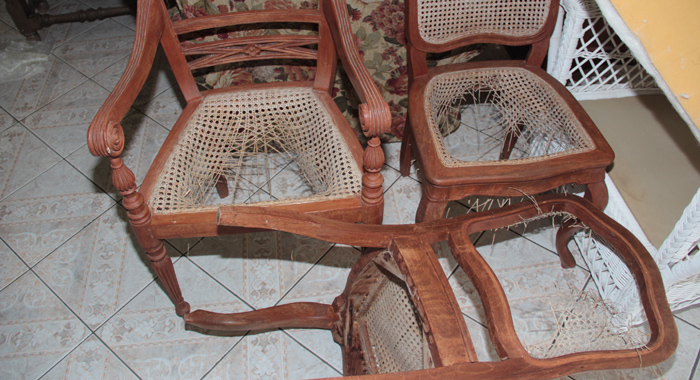 Broken furniture, which Stephen Pollard said was damaged by the family for whom NEMO rented the house.

A homeowner is threatening to sue the National Emergency Management Organisation, over what he says is damage left to his property by a family for whom the state agency rented the ground floor of his house for two years beginning in 2013.

Stephen Pollard, who, along with his wife, co-owns the two-storey house at Fountain, told iWitness News of the situation in an interview in Kingstown on Monday, where he was staging a one-man demonstration, calling for the removal of a commentator from a radio station.

Pollard, a frequent caller to radio defending the Ralph Gonsalves Unity Labour Party (ULP) administration, said there are persons in St. Vincent and the Grenadines, who are “frightened, scared for what the Unity Labour Party could do to them.

“And they belong to the Unity Labour Party, you know. And when it do them things, they are told to take it, they love Ralph, and continue to vote Labour.”

Pollard, a Barbadian who is married to a Vincentian, said that he has been speaking about Gonsalves and his exploits for 48 years.

He told iWitness News that he and his wife, who was born and raised in Park Hill, a village in North Central Windward, which Gonsalves has been representing in Parliament since 1994, rented NEMO the ground floor of the house as accommodation for one of the families whose home was destroyed in the December 2013 trough system.

Pollard said that Howie Prince, then director of NEMO, brought the family to the house, which he said was “furnished by me and my wife hard-earned gratuity and pension money.

“And two years later, those people had our house wrecked. I had to speak to Howie Prince a number of times. I even had to write the prime minister about him,” Pollard said, adding the situation has not been resolved, even as Prince has been  “allowed to be elevated to higher office in New York”, a reference to Prince’s recent appointment as this country’s Consul General in that North American city.

Pollard said that while he gave Prince a bill of EC$20,000 for the damage to his property and its contents, Prince told the Cabinet sometime before June 20 to give the Pollards $2,000 in compensation.

“The $2,000 can’t even buy the replacement stove that had to be replaced and that is only one of many things that were destroyed in his home,” Pollard told iWitness News.

He said he has failed in his many attempts over months to secure an audience with Gonsalves.

“A full year of being unable to use our house to get money to help my wife, because my wife ain’t work since 2013 August. All of my gratuity money from Barbados I spent it on our home, to spend it so that we can make some money from one of the [storeys] of the house] and Dr. Gonsalves has not returned not one call to me, so I will have to believe that he believes that Howie Prince tell he to give me $2,000 so I only fit for $2,000,” Pollard said.

He said he went to Treasury Department and confirmed that there was a cheque there for $2,000.

“And I told the government employee I’m not gonna receive that, you know; I only want to see it because I am hoping to get to speak to Dr. Gonsalves. But Dr. Gonsalves being so busy, he always out the country, and he doing a good job when he out the country, cause he looking for money to bring back for Vincentians to enjoy life and Dr. Gonsalves has not called me yet.

Pollard, however, said that no court can make any government obey any judgement that the court gives.

“But, I can’t understand how Dr. Gonsalves could know that my wife come out of Park Hill and he is a country man and a Park Hill man and Howie Prince — I don’t even know where Howie Prince come from, but Howie Prince can tell them in Cabinet to give me $2,000 and I carry a bill to Howie Prince for $20,000…

“I know that if Howie Prince had put those people in Cecil Ryan’s house, Cecil Ryan would have had to be paid every cent and his house would have been returned in the state he gave NEMO in. If it was Noel Jackson’s house, the same thing would have happened. But my wife come out the country and she ain’t nobody in the eyes of Cecil Ryan and Noel Jackson and a lot of them in the ULP so she must take Howie Prince actions and stomach it and continue to vote for the ULP?”

Pollard said that when Cecil “Ces” McKie, Member of Parliament for West St. George, where Fountain is located, was campaigning, he said he did not have to go down in the gap where they live because it is only eight votes down there and they can’t change the results of the election.

“So he never went down by my wife’s place and my wife went and vote for Ces McKie because she feel she voting for Ralph Gonsalves and his government. And you can believe that these people been allowed to do these things to my wife, and by extension me, and Howie Prince get to go to New York to be a consul general in New York?

“I can’t understand why Prime Minister Gonsalves can’t see it fit to pay for the damage at my home and let me and my wife rent our home to make a money, just as he say — put on something on your house, bring in people, make some money, let the government make some money, and we all go forward. But me and my wife can’t go forward, but Howie Prince can go forward to New York and draw a bigger salary,” Pollard said.