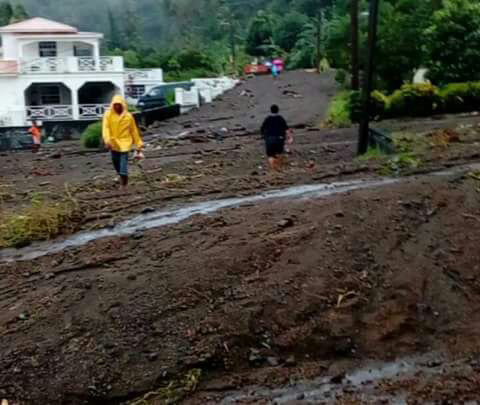 Thousands of Vincentians will go to bed without water and electricity tonight (Tuesday) as landslides and blocked road prevented utility workers from reaching areas in northeastern St. Vincent cut off as the heavy rains that have been pounding the country over the past few weeks continued into Tuesday night.

Schools will remain closed on Wednesday for a second straight day as a result of the continuous rain associated with the passage of a trough system.

The sole commercial provider of electricity, VINLEC, said that communities north of the Rabacca Dry River in northeastern St. Vincent, and Richmond Vale Academy and beyond on the northwestern side of the island would be without power Tuesday night.

VINLEC spokesperson, Tamara Job-Sprott, said that the state-owned company sent teams to North Windward but were unable to go beyond Overland because of blockages to the road.

“So, as a result of that, there are some areas that will remain without electricity this evening,” Job-Sprott said.

She listed those areas as Overland, Magum, Sandy Bay, Point, Owia, and Fancy, adding that VINLEC will return to the area Wednesday morning to do another evaluation regarding restoration.

VINLEC’s teams were, however, working to restore power to the Cumberland to Richmond area on Tuesday.

In the meantime, the company has repeated it’s warning for persons to stay away from downed power lines and poles.

“We had reports earlier today that that was a problem in the area,” Job-Sprott said and urge persons to call or Whatsapp VINLEC’s emergency number — 456-1540 — to report faults or emergencies.

Meanwhile, the Central Water and Sewerage Authority (CWSA) reported late Tuesday that there were seven major breakages to its transmission main at Sandy Bay, and blocked intakes at Perseverance, Jennings and Hermitage.

As a result, the North Leeward communities from Coulls Hill to Richmond, Georgetown to Fancy in North Windward and Stubbs to Byrea on the windward coast are without water.

The CWSA said it wanted to remind the public that with the continuing rainfall, all of its systems remain extremely vulnerable and a loss of supply may be experienced any time.

Tuesday evening, forecasters said they were extending the flood warning for St. Vincent and the Grenadines until 8 a.m. Wednesday.

“Satellite and radar imagery during the afternoon shows an extensive area of cloudiness and showers still persisting over the area and this is expected to continue during the night and into tomorrow. As a consequence, some pockets of moderate to heavy showers, periods of rain and the occasional reduction in visibility can still be expected,” the National Emergency Management Organisation (NEMO) said in a statement Tuesday evening.

Disaster managers said in an update at noon on Tuesday that 30 persons had to be provided with shelter and 15 houses were destroyed and a further 20 damaged.

There were no reports of death or injury associated with the storm.

But the storm left extensive damage to homes and private property across the country. Floodwaters dug up graves in cemeteries in Sandy Bay and Rose Bank, with an entire casket being visible in one instance.

A number of government officials, in interviews with the state-owned National Broadcasting Corporation (NBC Radio) on Tuesday, painted a picture of the impact of the storm.

He said that Sandy Bay has been hit “tremendously hard”, adding that a number of roads are impassable.

“The precariousness of some of the roads, those that are passable, it seems that their collapse would be imminent. A number of homes have been flooded, some have been destroyed; temporary bridges have been washed away and I think is on a scale worst, for this areas, certainly, than the April Floods of 2011.

“It is going to require tremendous work. Not only clean up work but rehabilitative and reconstructive work.”

Gonsalves said that landslides had cut off a lot of villages on the leeward side of St. Vincent.

“But the damage, at least to my eyes on the leeward side is not infrastructural. It’s the sort of damage that we can be sorted out with a bulldozer or a front end loader to push some debris away and so on.”

Gonsalves said he had not had a report from Minister of Transport and Work, Sen. Julian Francis, but said that the Chief Engineer, Brent Bailey, had told him that the anecdotal reports he had received indicated that the damage on the leeward side was unfortunate but can be addressed in a matter of days using heavy equipment.