SVG feeling negative impacts of not having a psychiatrist 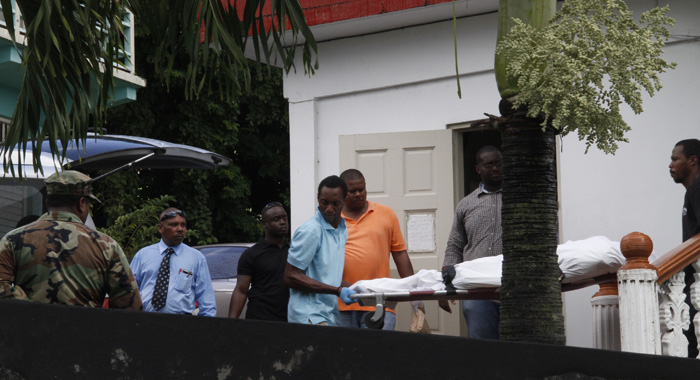 A teenager is believed to have killed four persons in St. Vincent, days after a court said he should see a psychiatrist. (IWN photo)

St. Vincent and the Grenadines is feeling the negative impacts of not having a psychiatrist on the government’s payroll.

While those impacts might have been contained largely to the judicial services and providing healthcare for patients at the Mental Health Centre, they spilt out into the public sphere in a most shocking way early this month, when four persons were killed, reportedly by a mentally ill man.

After the death of the four persons on the night of Nov. 13, reportedly killed by Jurani Baptiste, 18, a Sandy Bay resident with a history of mental illness, Director of Public Prosecutions, Colin Williams accused the Ministry of Health of having failed the nation.

He told The Vincentian newspaper that the Ministry of Health has failed the government by not recruiting a qualified psychiatrist to analyse suspects or accused persons who might have displayed symptoms of mental illness.

Williams told the newspaper that there were about a dozen individuals awaiting court hearings, but the process was being delayed due to the lack of the proper resources to provide mental health evaluations.

Speaking at a press conference this week, Prime Minister Ralph Gonsalves said he was not going to comment on the views of the chief prosecutor as to whether the health ministry has failed the state.

“He may be right, he may not be right. What is undeniable is that there is no trained psychiatrist at the mental hospital,” Gonsalves said.

“There is one on the books and we have been trying to get one and it has been difficult to recruit someone.”

He told the media that the government has psychologists and trained nurses in the areas of mental health.

An iWitness News investigation has found that Baptiste appeared before a magistrate in Georgetown days before the alleged killing spree and the prosecutor asked that the teenager be sent for a mental health evaluation.

Gonsalves told the media that the presence of a psychiatrist “doesn’t address the mental health issue in the whole, but … is critical in the judicial system, because I know the judge has commented on that, too”.

The prime minister said that on Friday evening he spoke to the Chief Medical Officer, Simone Keizer-Beache and asked the same question about getting a psychiatrist

“And she has outlined to me that they are seeking to recruit one and I know that that search has been going on, but that in the meantime, it appears as though they are in the process of concluding … an arrangement with a retired psychiatrist from another country who could at least come in on an organised, though itinerant basis, to address some of these assessments,” Gonsalves said.

He said his government is very concerned about mental health and that is why it will soon open a new facility — an apparent reference to the refurbished Mental Health Centre at Glen.

“But it needs to be staffed with, among other things, a trained psychiatrist,” Gonsalves said, adding that the nation needs to be on the lookout for persons who have a susceptibility to an abnormal mental condition, misusing and abusing drugs.

“I am not discussing any particular case, but each of us would know on our own — we don’t live on Mars — that while, and the evidence has come in that a person who doesn’t have a predisposition towards a particular mental condition may smoke … marijuana but it doesn’t do them any quote-unquote harm in any psychotic sense, but there are others who make have a predisposition and where the habitual use may create difficulties, and, of course, worse, if they are using cocaine or crack or homemade drugs from all sorts of legal substances which they find them on the internet…”

iWitness News has been informed that Baptiste had a history of use of marijuana a cocaine.

“Some things which I hear people are mixing in brews in one kind or the other to take, to ingest, it is just mind blogging, absolutely mindboggling. And that is why I talk about the homes, the school, the churches, the community, the media,” said Gonsalves, who had noted that he was not speaking of any particular case.

He asked how are the police to know that there is a young man in his house smoking crack cocaine or putting together some “mysterious brews”.

“It would come to them when a danger arises. Maybe the community would also cover this danger for a while — or friends.”

He said the society also has to drop the stigma associated with mental illness.

Regarding the government’s efforts to recruit a psychiatrist, Gonsalves said: “I keep my fingers crossed that the solution, at least temporarily, what the CMO is telling me, that it will come about, because the resources are there for it.”

Correction: An earlier version of this article named the DPP as Colin John. The chief prosecutor is actually Colin Williams. Colin John is acting Deputy Commissioner of Police.