Dear comrade Fidel was no friend of world peace 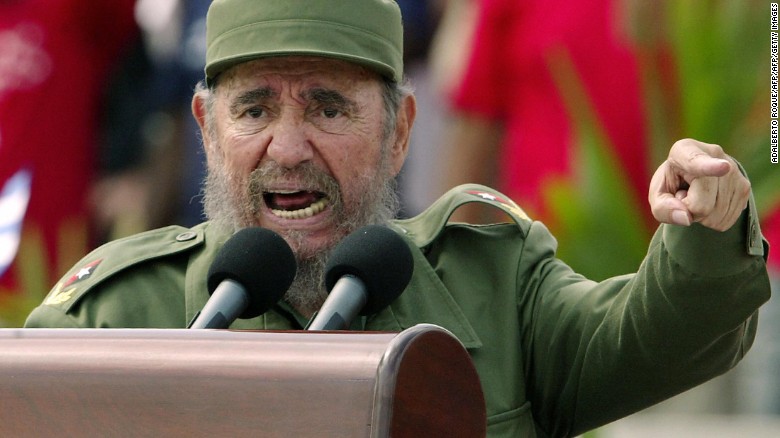 “You, my dear comrade, embodied humanity’s struggle for a free, dignified life; a life free from exploitation, a life full of love” (The Vincentian newspaper, Friday, December 2, 2016).

This is the first sentence of a staff commentary titled “Dear Fidel” in the oldest weekly in St. Vincent and Grenadines, a fawning tribute that could have well have been composed by the editorial board of Granma, the official newspaper of the Central Committee of the Cuban Communist Party.

The words “dignity” and “dignified” occur seven times in this short essay, testimony to the fact that our Caribbean civilisation has always been characterised by a generalised inferiority complex — a sense of self and nation that says we are inferior to others in wealth, culture, achievements, status, influence, respect, power, and a host of other traits. Fidel Castro was seen as challenging this engrained sense of inadequacy, hence his veneration for over 50 years throughout our region, indeed throughout the Third World.

In short, it was not so much what he did for or to his own people — his economic failings and miserable human rights record which, among other things, lead to one-fifth of the population fleeing to the United States, are all too well known — but rather (as the remainder of the Vincentian newspaper article clearly shows) his willingness to stand up to the most powerful nation the world has ever known, the United States of America, which is the real source of his lionisation among people of all political persuasions.

Though this sentiment is understandable in our small and insecure country where a search for dignity has even lead to revenge murders among scores of young men in recent years, it does not give leave to the Vincentian newspaper to rewrite history.

The most outrageous of many outrageous statements in their sycophantic tribute to Cuba’s strongman is that, “We know, comrade, you stood for world peace, for a nuclear arms-free world.”

Nothing could be further from the truth. Castro was first and foremost a compulsive and ruthless warmonger. A violent overthrow of the government in his own country in 1959, followed by the execution of hundreds of its supporters, interference in the Congo crisis in 1965, fomenting an insurgency in Bolivia in 1967, fighting against Israel in the 1973 Arab-Israeli war, imperialistic military meddling in the civil war in Angola in 1975, combat assistance to Hanoi in the Vietnam conflict in the 1970s, military action against Somalia in their conflict with Ethiopia in 1977, and another round of battle in Angola in 1987-88.

Overall, as many as 5,000 Cuban troops died in Angola during the 1970s and 1980s, hardly a proud achievement for a small poor country eager to spread its communist paradise throughout the world using brute force. Hardly, the record of a “comrade who stood for world peace”.

Nor did Fidel Castro yearn for a “nuclear arms-free world.” On the contrary, in response to the failed Bay of Pigs Invasion of 1961 by Cuban freedom fighters who had fled to the United States to escape the 1959 revolution, together with the presence of American ballistic missiles in Italy and Turkey, Soviet leader Nikita Khrushchev decided to agree to Castro’s plea to place nuclear missiles in Cuba to deter its future harassment by the United States. An agreement was reached during a secret meeting between Khrushchev and Castro in July 1962 and construction of a number of nuclear-armed missile launch facilities started later that summer.

When the United States learned about this they demanded their removal. After several days of tense negotiations with the Soviet Union the “Cuban missile crisis” was resolved to the mutual satisfaction of the two major parties, both of which wanted to avoid a nuclear holocaust.

The Cuban disciple of Armageddon was outraged by this outcome.

Timothy Naftali, a University of Virginia professor and co-author of “One Hell of a Gamble: Khrushchev, Castro and Kennedy, 1958-1964,” describes why Khrushchev thought Castro, who had sent him a letter supporting a pre-emptive nuclear strike against the United States during those tense days in 1962, was a madman:

“Ultimately, what the letter says is, ‘Nikita, if you have to use nuclear weapons against the United States to defend my country, and even if that means the Americans will retaliate by blowing up my country, do it for the sake of international socialism’”.

Castro went ballistic when he learned that Khrushchev had agreed to pull his missiles out of Cuba in exchange for America pulling their out of Italy and Turkey. He kicked in a wall and smashed a mirror, calling the Soviet leader “an asshole” and a “son of a bitch”.

This madman’s most lasting contribution to the world is to serve as a blueprint for today’s mad leaders such as Kim Jong-Un of North Korea to Abu Bakr Al-Baghdadi of the Islamic State who constantly threaten to sacrifice their people and the rest of the world to achieve their fascist goals.

With a “dear Comrade” like that, the editorial board of the Vincentian newspaper – indeed, the entire civilised world — needs no enemies.