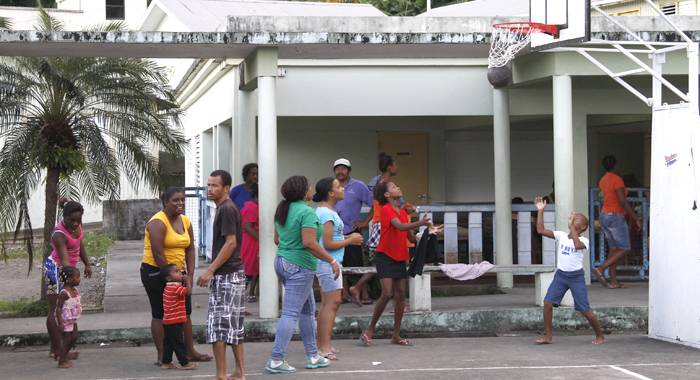 Scores of persons were forced into emergency shelters after their homes were destroyed. Here, some of them play basketball at the Sandy Bay Gov’t School on Sunday. (IWN photo)

Drinking water and clothes were on Sunday identified as the two main needs among the 90 persons who being housed at the Sandy Bay Primary School after their homes were destroyed or damaged by the trough system last week.

The Central Water and Sewerage Authority (CWSA) has been working to restore waters to the affected areas and has been distributing water to households, but drinking water was still a challenge when iWitness News visited Sandy Bay on Sunday.

On Friday, the CWSA issued a bulletin urging residents of North Windward to boil all water collected in open containers before consumption.

“This measure is to safeguard against any potential contaminants the water may come into contact with while being collected and stored,” the CWSA said.

On Sunday, Owen Baptiste, one of the emergency response coordinators at the Sandy Bay Primary School, where 90 persons were being housed, told iWitness News that drinking water and clothing were the main need of the 90 persons being housed there.

One of our main concerns, still, is water. Even though water was restored yesterday (Saturday), drinking water is a problem. Most persons now are dehydrated — babies and adults; everybody generally. So that is one of the things that we really want to get going…” Baptiste said.

He said the shelter is appealing for clothing as many persons, whether they were affected by the extreme weather or not, couldn’t do much in terms of cleaning or washing clothes.

“So, persons right now are appealing for clothes and water,” he said of the residents of the emergency shelter.

Baptiste said 134 persons moved into the shelter when it opened last week after the through system that has changed the landscape of the North Windward community.

On Sunday, there were 90 persons representing 22 families still at the shelter.

Baptiste said some of the persons in the shelters were going to their homes from time to time to try to clean them.

However, eight persons have lost their homes and were awaiting word from the government regarding assistance.

“We have been doing well so far in terms of our team, helping each other in terms of calling in person to deal with trauma in terms of counselling and things like that,” Baptiste said.

“We give them three meals per day,” he further told iWitness News, adding that the coordinating team tries to vary the menu.

He, however, said that the adjustment for some of the displaced persons has been difficult.

“They are comfortable in one way but in others, it’s like their mind is not there,” he said.

“Parents or those who were affected badly, sometimes they even sit and cry. So sometimes, we have to get them to counsel them,” Baptiste said.