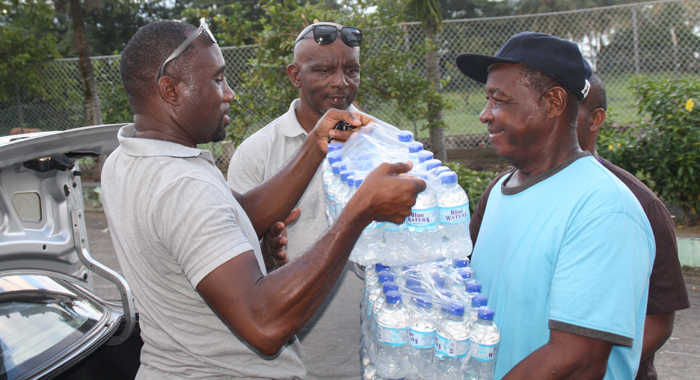 Chance, left, and Prescott, get some assistance in transporting the cases of water into the emergency shelter. (IWN photo)

iWitness News, St. Vincent and the Grenadines’ leading news and current affairs website, coupled a humanitarian gesture with its journalism when, on Sunday, it distributed several cases of bottled water to persons in Sandy Bay who were affected by the trough system last week.

The water was a most welcomed donation, as drinking water was still not readily available in the area even as the municipal supplier was trucking in and distributing water to affected residents.

Executive Editor of iWitness News, Kenton X. Chance, and sports journalist E. Glenford Prescott, the website’s sports writer, distributed the water both directly to residents as well as to the emergency shelter at the Sandy Bay Primary School, where 90 persons were being housed.

Chance said that he thought of donating water to residents after hearing that drinking water was still not readily available and based on his own experience covering the aftermath of natural disasters.

“I reported on the aftermath of the 2013 Christmas Eve trough system in St. Vincent and I saw how desperate persons were for clean drinking water. In addition to that, I was in the Bahamas and Haiti in October covering the aftermath of Hurricane Matthew and I know, first-hand, the challenges of living with a very limited supply of clean water immediately after a natural disaster,” Chance said.

He said he was happy that iWitness News, notwithstanding its meagre resources, was able to make a contribution to improving the well-being of the residents.

“iWitness News, notwithstanding the reach and scope of our journalism, is still, financially, a very small operation. We receive no advertising support from the government and all of our revenue comes from private advertisers and intermittent donations. However, in keeping with our philosophy, we are always there to help in times of natural disasters or even contribute directly to citizens and organisations in need. We generally do this quietly, and only mention it to the extent that we believe that doing so will spur others to act in similar ways,” Chance said.

The water was a welcomed donation and came at a time when water and clothes were identified as the two most important needs among persons at the Sandy Bay Primary School.