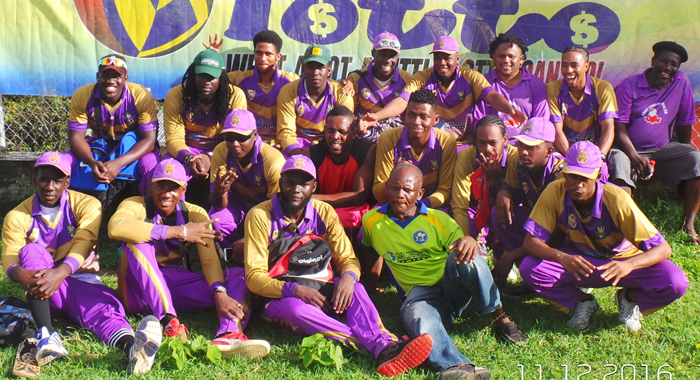 Gairy Construction Simple Boyz, on the back of another Desron Maloney century, rushed to their fourth consecutive title in the National Lotteries Authority (NLA) Top Belair Progressive Organisation (TBPO) Softball Cricket Competition on Dec. 11 at the Dauphine Playing Field.

Maloney who is rated as this country’s most prolific softball batsman courtesy of his insatiable appetite for scoring centuries including a record 222, was in imperious form as he piloted his team to a crushing 127 run victory over NICE Radio Clinchers in the final of the long running tournament.

Batting first after winning the toss, Simple Boyz reached 201 for 3 in their allotted 20 overs, with Maloney getting an unbeaten even 100.

The tall elegant right-hander arrived at the wicket in the 7th over with the total on 42/2 and added 141 for the third wicket, with Eldon Morris (28) in 12 overs.

Maloney, in a predatory fashion, pounced on anything that was over-pitched or too shot and dispatched them with great panache. His breath-taking array of strokes included a couple of square driven sixes over extra-cover. In all, he struck 12 sixes and 4 fours, one of which was a late dab with great finesse down to third-man and another a sumptuous square drive all along the ground to the point boundary.

Jabarri Cunningham got 30 with 4 sixes at the top of the innings.

NICE Radio Clinchers never looked up to the fight and meekly submitted for the second time in as many years to the champions as they folded for 74 in 15.1 overs as the Gairy Construction bowlers took control from early and never let up.

Speaking at the closing ceremony, chair of the TBPO, Ashford Wood, stated that some of the objectives set for this year’s competition were met.

Wood also said that it was heartening to have an incident free competition.

“If we were to reflect on what had transpired at the centre over the last two, two and a half months, we would have achieved our objective. And, when we look at what is happening around us in the country today, it makes one feel proud that it has not touched us; none of the crime, none of the violence has really come home to us,” he said happily.

Wood said that he feels pleased to know that the activities put on by his organisation have been able to get rid of what he called anti-social behaviour in the community.

Adonis Nanton of Stingers was awarded most valuable player of the competition with his 310 runs and 10 wickets. Nanton also received the award for most runs in the competition.

Azmon Forbes of Stingers was the leading wicket taker in the competition, with 19 wickets.