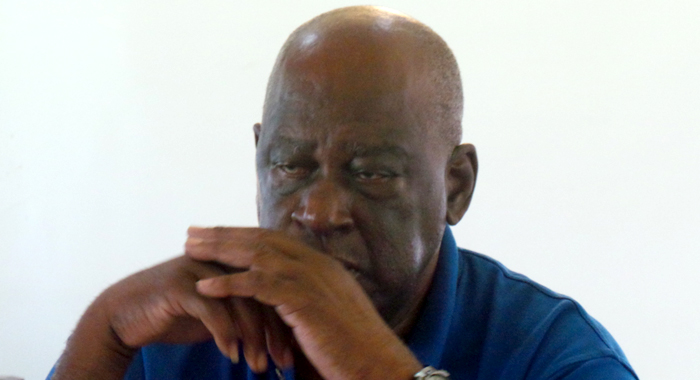 Elson Crick in his final moments as an SVGCA executive member.

Cricket administrator Elson Crick who lived what can be described as a charmed life over the last few years as an executive member of the SVG Cricket Association (SVGCA) took note of serious discontentment with his tenure and chose discretion over obvious humiliation at the recent annual meeting.

This appeared to be the case when Crick, who served for almost one score and 10, declined nomination to contest the post of first vice-president, the post he held for the last five terms.

Miles Bascombe, who previously served as a committee member, was elected unopposed to the position after Crick took what many felt was a common-sense decision at the meeting at the President’s Suite at the Arnos Vale Playing Field on Dec. 3.

Crick, a former medium pacer with Saints, one of the country’s oldest clubs, was first elected as a committee member under a Lennox John presidency in 1988 at the St. Vincent Grammar School. He later rose to the position of first vice-president and did so under John, Julian Jack and later, Kishore Shallow.

However, while Crick was strategic in getting re-elected continuously despite a cross-section of persons who questioned his suitability to serve, there were clear indications that his time to be booted out had come based on pre-annual meeting comments.

It must be noted that in 2007 at an annual meeting at the St. Vincent Grammar School, affiliates were committed to having Crick, who was out of state at the time, voted out of office, but a motion by Jules Anthony of North Leeward to return the executive en masse was seconded by Curtis King of Belmont and accepted by affiliates. This offered Crick his first ‘sports Houdini” opportunity.

In a last ditch effort at the Dec. 3 meeting, 10 years after another escape route was offered to Crick through the efforts of Wendell Glasgow, who, like Anthony, moved a motion to have the entire executive returned to office unopposed.

There was a pause with nervous glances exchanged between affiliates, many of whom appeared to be not in favour of the Glasgow motion and, as expected, there was a counter motion, which won 31/4.

It resulted in Crick having to face the ballot. And a warning salvo was fired over his bow when Bascombe was the first nominee for the position resulting in Crick making a hasty withdrawal when his name was belatedly put forward.

His last minute antics is said to have brought into question his comments to a local media house “that he had made that decision four months ago” not to contest. This was compounded by Shallow’s comments in his acceptance speech, in which he said that had Crick informed the executive about not contesting he could have been honoured at the Association’s awards dinner for his years of service.

While Crick had indicated as far back as 2011 that he would leave at the end of that term, which he won by beating Cecil Charles 27 votes to 22, he continued to roll the dice and coming up flush each time and added another two-year term in 2013.

The danger sign that his status among affiliates had changed came during the vote of no-confidence which took place in May 2014 against Jack. Crick, like many of the other executive members, abandoned Jack in midstream and chose then to sit on the floor and fired questions at the embattled president.

A hurting described members of his executive as “snakes”.

Crick made his way back onto the executive as a first vice-president in the interim executive and continued in that post when the executive was re-elected unopposed at the December 2014 annual meeting.

But based on comments from many with knowledge of what had happened, it was felt that Crick’s “strategic histrionics” were at an end and so it played out at the annual meeting and this despite subtle attempts by high-ranking Windwards Board officials “to say a word” and the claim that “the PM had asked Crick to seek re-election”.

There were suggestions that Crick had fallen down on some assignments, something also pointed out by Jack as a criticism of the former first vice-president.

His inertia is said to have caused the SVGCA thousands of dollars on projects, which he had promised to handle taking into consideration his substantive post as Communication Consultant to Prime Minister Ralph Gonsalves.

Shallow explained that the SVGCA is in the process of notifying both bodies of the change.

One reply on “Elson ‘Cricket’s Houdini’ reaches end of rope”