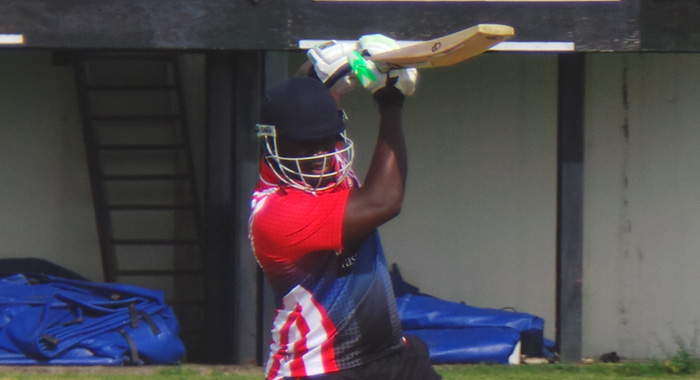 Team Rivals in their post-Veira era.

Casmond Walters has powered his way to the 2017 domestic cricket season’s first half century as he helped last year’s losing finalists, Team Rivals, to a comfortable 118 run win over Victors TWO, when the National Lotteries Authority (NLA) Neil Williams T20 competition got going at the main Arnos Vale Playing Field on Sunday.

The now-muscle-bound Walters reaffirmed his status of the last three years as one of the country’s most talented cricketers and cleanest strikers of a cricket ball as he vanquished the Victors 2 bowling in smashing 67 in another brilliant display.

Batting at number three, he shared a 50-run second wicket partnership with Hyron Shallow (34) of which he made 37. Showing little respect for the below par attack, Walters hit 5 sixes, 3 of which ended on the outer walls of the ground.

The sound of the ball slamming onto the galvanise sheeting, could have had some thinking that there was a shift in the location of the shooting range from a few yards at the back of the playing field.

And not only was the batsman destructive, he was also unifying as one shot off the bowling of former West Indies seamer Ian Allen brought two test careers 23 years apart together as it landed on the roof of the Mike Findlay Pavilion before exiting the ground-only six runs. He also struck 5 fours some with brute force but one memorable one as well, which streaked across ground and looked to be the front-runner to a peal of thunder.

The departure of Walters then saw the big-hitting Roneil Jeffrey sustaining the flow with telling blows. He made 41 in quick time with 4 drone-like sixes, all hit with tremendous power. Kesrick Williams made 19 and there were 24 extras.

Victors 2 were restricted to74 /5 from their 20 overs with opener Adinol Richards hitting an impressive unbeaten 47, which included 3 fours and a 6 over long off of the bowling of West Indies pacer, Kesrick Williams.

The match was the first for Team Rivals since the death of founder and manager Carlos “Fatman” Veira, with Peter Campbell attempting to fill the huge vacuum left by Veira.

In the morning match, defending champions FLOW Radcliffe overcame a few anxious moments to beat a game but out played Triumph United by 7 wickets.

They were led to victory by captain Lindon James who made 44 and West Indies U19 batsman, Gidron Pope 31* as they reached 84/3 replying to Triumph’s 80/6.

Batting first, Triumph United were not for the first time indebted to Keroy Roberts (38*) who struck 2 sixes and 2 fours for some respectable to their innings as the other batters struggled to negotiate the bowling of Windward U19 captain offspinner Othneil Lewis. The tall offspinner took full advantage of timid nature of the Triumph batsmen to return figures of 4/13 from his four overs.

FLOW Radcliffe then found themselves two wickets down with one run on the board as both Romano Pierre (0) and Wayne Harper (0) failed to move the scoreboard. It could have been even worse were it not for James being badly missed at long-on with the total still in the mid-twenties.

The batsman then took advantage of the belated “Christmas present” to lash 5 fours and 2 sixes in partnership with Pope to take their team to the brink of victory. James was given out LBW from one that kept low from Travis Cumberbatch with the total on 75 and his failure to leave the crease immediately upon being given out could see him facing possible sanctions by the SVGCA.

Pope, who is suiting up with FLOW Radcliffe this year following the demise of Spartans hit 3 fours and a six in his unbeaten 31 not out.

A record 18 teams are taking part in the tournament this year, which is named after late Vincentian cricketer, Neil Williams, who represented the Windward Islands in the regional first class competition and England at the international level.

Following the preliminary round of competition, the two top teams from each of the groups will advance to a Super Six.

The Super Six phase will be a round robin format, with the two top teams meeting in the final.