Man smiles after being jailed for gun, ammo 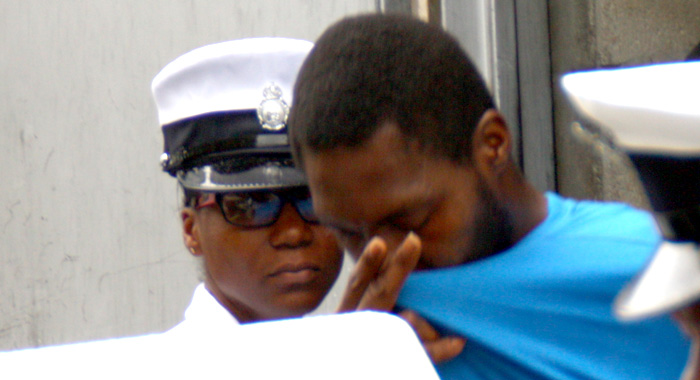 Keon Scott attempts to hide his face as he is led away from the Serious Offences Court on Tuesday.

A 32-year-old Diamond man smiled on Tuesday after being handed a four and a half year jail sentence, which would run consecutive to a one-year jail term he is already serving.

But while Keon Scott smiled inside the court after being sentenced, his mother bawled outside as he was led away by police officers after the proceedings.

The sentences would run concurrently.

However, they will begin after he completes his one-year prison term that had previously been imposed on him for escaping lawful custody.

Scott’s trial for the Oct. 10, 2016 offences was about to begin before Chief Magistrate Rechanne Browne Matthias at the Serious Offences Court on Tuesday, when the accused man told the court that he was guilty of the charges, to which he had pleaded not guilty when he first appeared last October.

The court heard that officers from the Rapid Response Unit were patrolling the road leading to the Diamond Landfill and the defendant and other persons were on the left side of the road near a galvanised shed.

The officers noticed that Scott was smoking what appeared to be a marijuana cigarette, so they stopped the vehicle and alighted.

Scott, in turn, walked away from the group and went behind the shed.

Police became suspicious and an officer went behind the shed in the opposite direction, where he met the defendant.

The police officer identified himself and requested a search and Scott consented.

The police officer saw a black and white handkerchief with a black handle showing in Scott waist. The officer opened the handkerchief in Scott presence and found the firearm, loaded with six rounds of ammunition.

Scott then told the police officer, “Officer I find it and is sell I been going sell it to make a money.”

He was arrested and taken to the Stubbs Police Station.

A police ballistics expert confirmed that the gun was in good working order and the ammunition live. Checks with the registry of holders of firearm and ammunition permits showed that Scott was not the holder of any such licence.

Asked by the magistrate if there was anything that he wanted her to consider before sentencing him, Scott said, “No.”

The magistrate told the defendant that she is certain that he is aware that the offences were serious. She said she does not like those types of offences because of what is happening in the country with gun violence.

Browne-Matthias further pointed out that someone who should have appeared in court that day on similar charges did not appear because he was killed recently.

She was referring to Campden Park resident Kamari Neptune, who was shot and killed in Redemption Sharpes on Dec. 29, 2016, while on bail in connection with an ammunition charge.

The magistrate further told the defendant that his excuse about finding the gun was a poor one.

She further noted that guns kill and told the defendant that if the ballistics expert had testified, he would have said that guns are designed to kill.

“You don’t want that for you or your family,” the magistrate said.

She further said that Scott’s criminal record, which lists five convictions –- for “not the best of offences” — didn’t go to his credit.

The magistrate told Scott that she did not want to spell out his offences to the court and he commented, “Me ain’t have no problem with that.”

The magistrate told Scott the fact that he pleaded guilty, though not at the earliest opportunity would result in a discount in the sentence she was considering.

She further said that he is still relatively young and even though things seem to have gone “so wrong” for him, he can be transformed.

She, however, noted that the gun was found loaded, “ready to go in case of anything”.

The chief magistrate said that the message she would want to send is to stop would be offenders in their tracks.

After the matter was disposed of, Scott stood up and told the magistrate that there was another charge against him and asked if that could also be heard then and there.

The magistrate, however, told him that that was not ready for hearing, adding that she also would not want to know at that point what other charge he had against him, lest she regrets not giving him a stiffer penalty.

Case against dead man called up for hearing