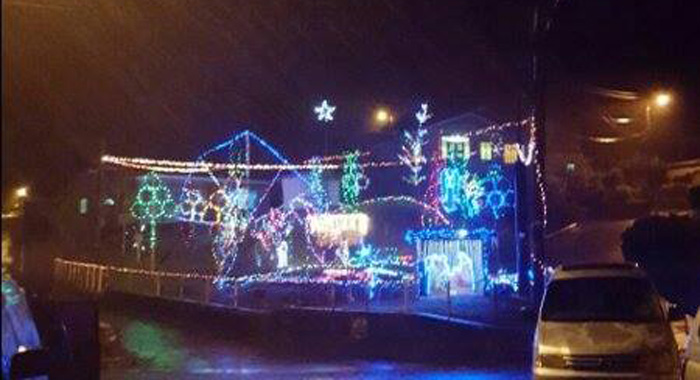 The daughter of Selwyn Patterson, head of the Rose Hall Cultural and Development Organisation (RHCDO), has defended him against a claim by some villagers that the group should not get any of Rose Hall’s prize monies in the National Nine Mornings Competition.

Rose Hall resident Richard Browne told iWitness News on Monday that he and a number of other residents, rather than the RHCDO, lit up the community during the Nine Mornings festival, a unique Vincentian festival that coincides with Christmas celebrations.

Rose Hall copped the top prize in the Leeward division of the national lighting competition for a reward of EC$1,000 and earned second place in the national competition, winning EC$2,000.

Browne said that the RHCDO had contributed to the lighting up EC$1,000 of the EC$3,000 it received from the National Nine Morning Committee.

After Rose Hall won the two prizes in the competition, Browne said he and his group were given the EC$1,000 prize. Browne and his team are maintaining that all the monies should go to his group, adding that this is also the position of villagers.

iWitness News contacted Mr. Patterson on Monday and he said he did not know of any controversy surrounding the prize monies.

But videos uploaded to social media show a very heated exchange, including some pushing, at a meeting Sunday to discuss the issue.

Patterson’s daughter, Sobrina Patterson, told iWitness News via Whatsapp on Tuesday that she “won’t let anyone look at my father as the bad person”.

Ms Patterson told iWitness News that RHCDO did give the lighting up committee EC$1,000 but also had a Miss Merry Christmas pageant for which Mr. Patterson had a female assistant.

“My father gave her 500 hundred dollars to help in getting the girls ready and other necessities, Also, he had to pay for the DJ, the Sound System which we all know that is not very cheap,” Ms Patterson said.

“The door where they had to pay 10 dollars was the assistant’s money. My father had nothing to do with that. Secondly, they did had other activities such as the games night which my group was a part of which is the United Legacy Empowered Development Organization where we had to prepare a dish and in return they paid for it…” she further said in the Whatsapp message.

“So whatever rumours the lighting up committee feeding the public is not true.. This issue was going on since last year and would not finish so who look like the ones who are desperate?” Ms Patterson told iWitness News, adding that she just wanted “to add to that report you put online about the Rose Hall nine morning winnings”.