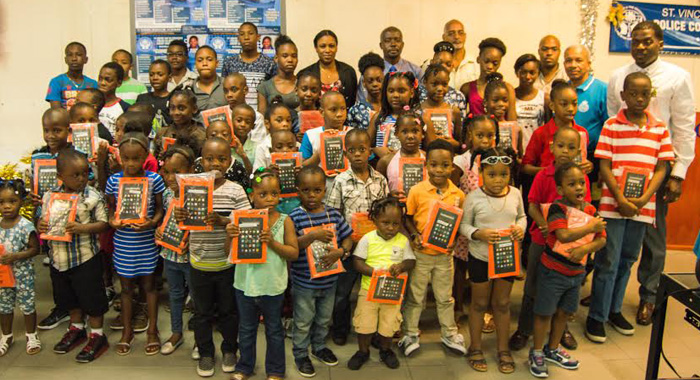 Smiles of joy and satisfaction beamed from the faces of children and their parents/guardians recently when the PCCU awarded 129 of its junior savers with an Amazon Fire Tablet each for successfully completing the Police Credit Union Weekly Junior Savers Challenge.

This was the third award ceremony of that kind for the PCCU and it was held at the Credit Union’s newly acquired corporate headquarters in the former Voyager Building on Bay Street.

In addressing the event, Manager of the PCCU, Seymonde Mulcaire congratulated the successful junior savers and their parents for using the challenge as a medium for saving in order to have monies readily available for the most difficult time of any year: January.

She proudly said that the junior savers challenge is carried out only by the Police Credit Union as no other Credit Union in SVG or in the region has such a programme, and thanked the board for approving the initiate.

She stated that the challenge, which was in its third year, commenced on Jan. 2, 2016 with 202 Junior Savers. It is opened to children ages 0-14 and each child has to begin with at least $1 the first week and add at least an additional dollar every week, so that in the 52nd week, they would be depositing at least $52 s.

The manager further explained that the junior savers were not allowed to pay in advance or late because it meant that the child would have automatically forfeited the challenge. At the end of the 52 weeks, each child would have saved no less than $ 1,378 individually.

President of the PCCU, Junior Simmons thanked the parents/guardians of the junior savers for saving with the PCCU and congratulated those who endured to the end of the Challenge.

He told the children that the monies they save today can chart their future tomorrow. He emphasized to the junior savers that by starting a savings plan now, no matter how small, can greatly assist them in achieving their personal goals in the future, be it an education, property, a car and taking care of their health. He said that the PCCU is a credit union where member’ monies are safe and their futures secured, especially the junior savers.