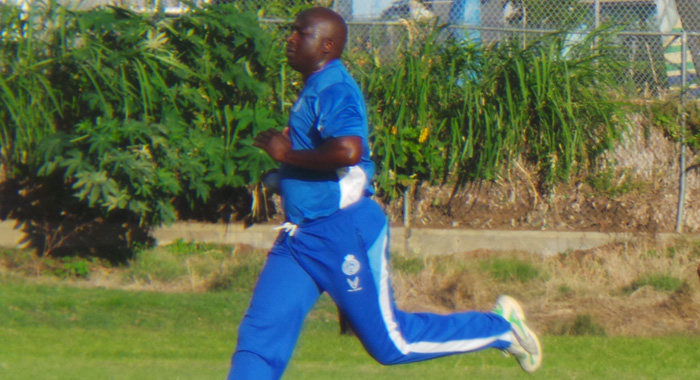 New recruit to the Royal St. Vincent and the Grenadines Police, Constable Desron Maloney, presented arms at the Sion Hill Playing Field in the form of his bat as he led Police to a comprehensive 120-run win over RW Sporting World SVG Community College with a shot-laced half century.

This when the 2017 National Lotteries Authority Neil Williams T/20 cricket competition continued last weekend as he made his debut for his new team.

The tall, languid right-hander who was among a number of cricketers who were snapped up by the constabulary, sent out a fusillade of shots over the head of the newcomers RW Sporting World SVG Community College, which had them scrambling for their foxholes from early.

After losing McLean Williams (12) off the final ball of the fifth over with the total on 28, Maloney, who was named Player of the Match,  then added 105 in 10.3 overs with Salvan Browne (42*) as they took the score to 133 before former departed for 71. He faced 42, struck 7 sixes and 1 four and got his runs at a breath-taking strike rate of just under 17. Danson Andrews, the former Victors opener, then added the late “scorched earth” to the innings with a 14 ball, 26 which included 4 sixes, while Browne inflicted his black and blue marks with 3 fours and 1 six in his unbeaten knock to see their team to 186/3. RW Sporting World SVG Community College, faced with the daunting task of getting in excess of 9 runs an over, had their flag lowered to half-mast from early with the pacey Romario Bibby and the useful Sylvan Spencer making life uncomfortable for the openers. But even in the face of having to fend numerous balls off their upper body, Afernee Joseph (3) and Jaheil Walters (6) showed grit and resolve in batting 6 overs in taking the score to 17. It was, however, always a tall order and, as expected, the students were kept in school, despite Romando Mars (22*) showing potential of a rising star with excellent technique in his near hour at the crease as his team ended 66/5 in their 20 overs.

In another match on Saturday, Guardian General Saints, behind a brilliant unbeaten half century by Rickford Walker, trounced Belfongo by 9 wickets at the main Arnos Vale Playing Field.

Allison Samuel added a top score of 43 to cap a good match while Winston Samuel chipped in with 20.

On Sunday, a scintillating Miles Bascombe half century helped Victors 1 to a 37-run victory over Triumph Cricket Club in a rain-affected match at the main Arnos Vale Playing Field.

Batting first, Victors overcame the early loss of Atticus Browne (one) to post 138/4 with Bascombe slamming 75* off 38 balls (SR 197.4) with 6 sixes and 2 fours and Alston Bobb 37 as the pair added 93 for the fourth wicket.  Vangelle Small 2/20 was the leading bowler for Triumph CC who were 37 runs below their target of 65 when the rains came.

In other weekend results at Sion Hill, Smashers won over Victors 2 by 21 runs on a revised target. Smashers scored 138 for 5 in the 16 allotted overs with Kirton Lavia 38 and Rawdon Bentick 34 the leading scorers. Leon Quashie took 2/20 from 3 overs bowling for Victors 2, who only got to 69 for 5 in 11.3 overs when play was called off. They should have been at 90. Adinol Richards topscored with 26 as Courtney Joyette and Javon Samuel both took 2 for 11 bowling for Smashers.

And also at Sion Hill on Sunday, Combined Youths beat Strike Eagles by 51 runs. Combined youth reached 96 for 4 in their 12 overs. Frankie Farrell led the way with 30, while Glenroy Wilson took 2 for 17 bowling for Strike Eagles who were dismissed for 45 in 10.3 overs. Geron Wyllie 4 for 13 and O’Neil Endeavour 3 for 11 doing the damage for Combined Youths.

Sunday’s other encounter between Carl Joseph Law Chambers ASCO and Bequia Cricket Association was called off without a ball being bowled.