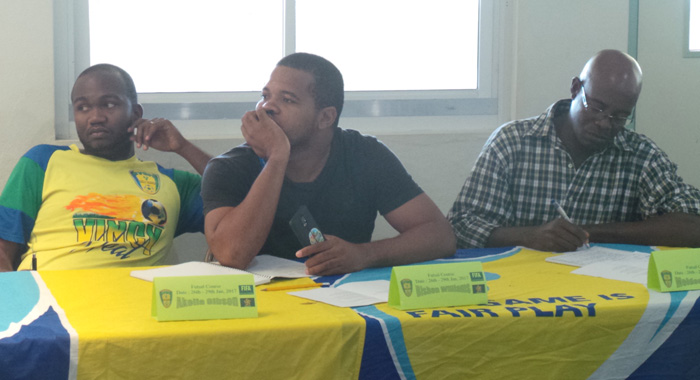 Some of the participants.

Twenty-one of the football coaches in St. Vincent and the Grenadines are now into learning the rudiments about a new phase of the sport, during a four-day CONCACAF-sponsored futsal course.

Futsal is a five-a-side game, normally played on a flat indoor pitch with hockey-sized goals and a size four ball with a reduced bounce. It is played to touchlines and all players are free to enter the penalty area and play the ball over head-height. Games are 20 minutes per half, played to a stopping clock (similar to basketball) with time-outs permitted, according to information on the English Football Association website.

The course, which opened at the Media Centre at the Arnos Vale Sports Complex on Thursday, will take the participants through classroom and practical sessions during the programme in helping them get an idea about the game.

The nature of the game places a large emphasis on technical skill and ability in situations of high pressure, and is subsequently an excellent breeding ground for football competencies that can be translated into the 11-a-side format of the game, the FA explained on its website.

The facilitator of the programme, FIFA Coaching Instructor Constantine Constant, warned the participants that futsal, which he said was introduced by a PE teacher in South America, comprises many things that are different from football but assured them that the information will be passed on in an easy to follow method.

He urged the coaches to make the effort to pass on the information gleaned so that the process of introducing futsal to the island will advance at a quicker pace.

The FIFA Instructor also indicated that his travels to countries in Africa have seen the interest picked up with many players, some of whom have played at the FIFA World Cup, attending the courses.

He said that of the 55 countries in Africa that are members of FIFA, Egypt boasts the most vibrant futsal programme and this is as a result of the enthusiasm with which the game was embraced.

Constance said futsal has been the catalyst for many of the big players on the world stage in the 11 a-side version of the game.

He substantiated this by informing the participants that Brazil’s 2002 World Cup hero, Ronaldo, played a goalkeeper in futsal and, according to him, the technique of kicking the ball with the toe learnt as a futsal player was responsible for two of the goals, including one in the final, scored by the player.

Pele, the man rated by many as the best ever to have played the game, said this about futsal and the impact it had on his game: “Futsal was important in helping to develop my ball control, quick thinking, passing, also for dribbling, balance, concentration. Futsal was very, very important, no doubt.”

President of the SVGFF, Venold Coombs, highlighted the fact the SVG is the first country in the English-speaking Caribbean to have hosted this futsal course and encouraged the coaches to make the effort to assist the federation with its development programmes.

He said that part of the federation’s plans is to have a futsal competition and the hosting of such a course is the beginning of the process.

“In order to have such a tournament you must have personnel and hence the reason why we are having this course to equip persons to function when the time comes,” said Coombs.

“So whatever information and knowledge you [receive] over the next four days — you would have failed yourself, football and the Federation if you don’t pass it on to others. Sharing is vital to our development.”

He said the coaches can do this by getting involved in organised coaching in their communities, schools or clubs or wherever the opportunities present themselves for coaching.

“In other words, this training that we are making available to you must not be allowed to fall on stony ground but must be sowed on fertile ground so we can reap a bountiful harvest to reflect the fruits of our labour,” Coombs said.

He said that with the U10’s now getting involved in competition, the situation was ideal to introduce futsal to these young players as a move towards bigger things.

“If we all work diligently hand in hand, futsal in SVG will not only take off through the amount of persons who will get involved in the game but it will positively impact the lives of players, coaches, officials and communities”.

Coombs said that a number of other courses are earmarked to come to SVG in the next few weeks and this is a sign that his executive is serious about development.

Martinique, according to Constance, was the first country to host the futsal Course, with Trinidad and Tobago next on his agenda.

Director of Physical Education, Nelson Hillocks, also addressed the opening and declared the course open. He challenged the coaches to be proactive and getting others to learn about the game of futsal. He expressed the view that like beach football and beach volleyball, futsal has the potential to become a major extension of the mother sport.