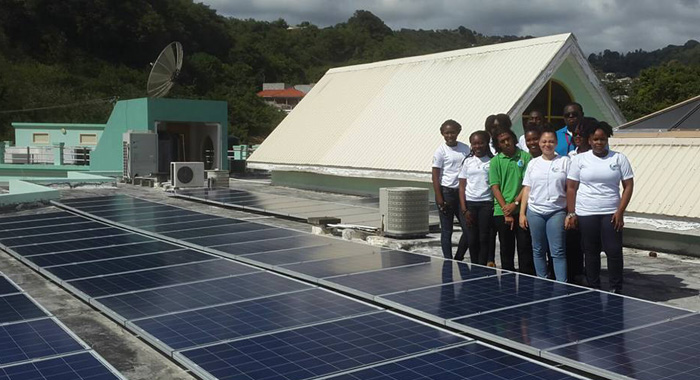 Some students of the SVGCC Environmental Club (2016-17) and the geography lecturer, Allanson Cruickshank, pose next to the solar panels.

The Villa Campus of the St. Vincent and the Grenadines Community College has saved about EC$6,330 in electricity cost as a result of a project undertaken by students.

The savings come as the Environmental Club at the college has installed a 22 kilowatt solar photovoltaic (PV) system at the Villa Campus.

The project coordinator, Allanson Cruickshank, who is also the lecturer in charge of the club, said the project was conceptualised since 2014.

The contractor also provided training in the basics of solar PV to members of the SVGCC Environmental Club and hands-on system installation training to three students of the college.

The PV system was commissioned last August and became operational in September 2016.

It is currently one of the largest of its kind on a public building in St. Vincent.

The system features an online monitoring component, which Cruickshank says will be very useful as a teaching and research tool since it allows students to access data on the performance of the PV system over the internet.

Cruickshank said that as of Jan. 30, 2017, the PV system had already averted 9.8 tonnes of atmospheric carbon dioxide and had produced 14.068 megawatt-hours (MWh) of energy since September 2016.

This helps in reducing the harmful carbon emissions which occur due to the combustion of fossil fuels to generate electricity. Solar energy produces no such emissions and is an effective means of climate change mitigation in tropical and sub-tropical countries. Furthermore, during these first five months of its operation the PV system has realised approximately $6,330 in electricity savings for the college.

The project was made possible through grant funding from the Global Environmental Facility’s Small Grants Programme (GEF-SGP) and the United Nations Development Programme (UNDP).

Cruickshank thanked the SVGCC Environmental Club members, past and present, who took part in various stages of the project’s development since 2014.

He also expressed his gratitude to the leadership of the SVGCC and the National Steering Committee of GEF-SGP for being supportive of the project.

Additionally, he thanked the St. Vincent Electricity Services (VINLEC) for facilitating the connection of the system to the national electrical grid.