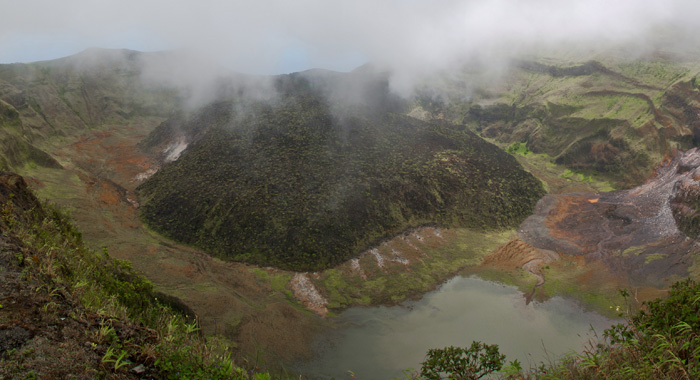 SVG is home to La Soufriere, an active volcano. Volcanic eruptions can cause tsunami. (iWN photo)

Scientists are set to learn more about volcanoes in the southern Lesser Antilles through recent installation of a temporary network of seismic instruments in St. Vincent and the Grenadines, which will bolster earthquake-monitoring capacity and facilitate closer study of the structure of volcanoes.

The installation was part of the Volatiles in the Lesser Antilles (VoiLA) project, which seeks to provide a better understanding of earthquakes and volcanic activity in the southern Lesser Antilles.

As part of this project, instruments will also be deployed in St. Lucia and Grenada. Additional studies on the development of volcanism in this region are planned for May 2017. Together these exercises present a unique opportunity to advance scientific understanding of natural systems that have great potential to impact the societies of the southern Lesser Antilles.

Subduction zones, where tectonic plates run into each other forcing the heavier plate beneath the lighter one, are known for their potential to generate large earthquakes, tsunamis and explosive volcanism. The islands of the Eastern Caribbean, or Lesser Antilles arc were formed in one of these subduction zones. This subduction zone has produced large earthquakes in the historic past and explosive volcanism has devastated large sections of Montserrat since 1995.

On completion of this project, scientists hope to have a clearer picture of the spread of earthquakes over the southern section of the Lesser Antilles, the location, potential size of these events and the mechanisms that generate them. The additional instruments deployed will complement the existing seismic network and facilitate an expanded earthquake catalogue (a list of earthquakes recorded in a particular region) by allowing smaller earthquakes to be recorded that would otherwise go undetected.  Beyond a more complete earthquake record during the period of deployment, this study will also improve models/images of the subsurface which can potentially aid in improving building codes and practices in this region.

The VoiLA project is funded by the Natural Environment Research Council (NERC) and it is a collaborative effort between several universities and research institutions based in the United Kingdom and Europe in partnership with The University of the West Indies Seismic Research Centre (UWI-SRC) and supported in St. Vincent and the Grenadines by the National Emergency Management Organisation (NEMO). For more information on the VoiLA project visit their website at: http://www.voila.ac.uk/.