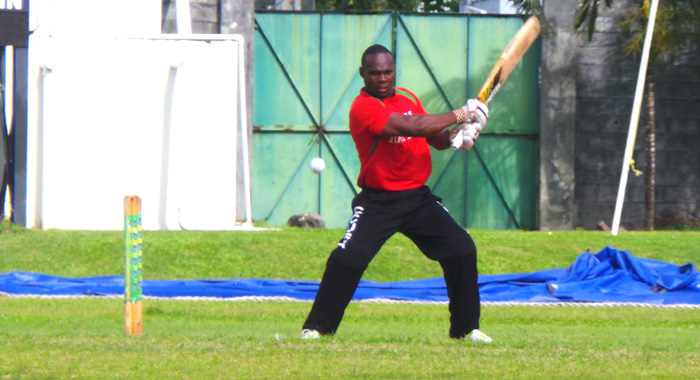 On Sunday, Team Rivals, who were dethroned in 2016 by FLOW Radcliffe, crushed surprise team, Smashers, on the backs of unbeaten centuries by the irrepressible Casmond Walters and the enigmatic Hyron Shallow, by a resounding 154 runs in their match at the Sion Hill Playing Field. SCORES: Team Rivals237/2 (20 overs), Smashers 83 (13.1 overs).

Team Rivals who were asked to take first knock in batsman-friendly conditions, began disastrously after losing opener Randeem Williams (0) with the total on six and Husani Porter (17) at 35/2 by the start of the sixth over.

This brought Shallow and Walters together and the pair added an unbroken record -setting 202 for the third wicket with Shallow scoring 102* and Walters 102*.

While both batsmen, scored impressive tons, it was Walters who once again stole the spotlight with another stupendous display in the middle in which he scored his century in 38 balls.

Currently the most talked about player in local cricket, Walters gave an indication of what things were going to be like for the Smashers bowlers by dispatching his first ball over the boundary — and as the bowlers found out that was the curtain-raiser to proceedings for the next hour and a quarter.

Playing with a strong wrist and excellent hand-eye coordination, he cleared the boundary on both sides of the wicket, including over extra-cover in another awesome display of power-batting.

His pyroclastic display saw him striking 11 sixes and four fours and collected his runs at a jaw-dropping SR of 261.54.

Shallow, meanwhile, at the other end, was his usual self with some exquisite drives and rasping cuts that saw him count 12 fours and three sixes and by virtue of getting most of the strike was able to pip his partner to the century mark.

Despite all the carnage, Courtney Joyette returned the impressive figures of 1/16 from four overs.

Although Walters and Shallow had a display, which not many things would have hard-pressed to overshadow, there was in fact one such event and once again it was the action of umpire Roger Davis. Davis who has been able to keep controversy as a close companion over the last few seasons, on Sunday moved from just being a silhouette in the game to “spotlight Dondada” as he not for the first time called a bowler for “chucking”.

This time the humiliated bowler was Kuthberth Springer of Smashers, whose action reports say had been questioned by Davis and others previously.

While the ICC has suggested that umpires report bowlers whose actions are believed to be suspect, it still gives the umpires the option of calling the bowler on the field. Springer bowled a solitary over on Sunday and conceded 29 runs.

Smashers who were asked to get their target of 238 in just under 12 an over, never got even close with veteran legspinner, Orlanzo Jackson (4/15), pacer Roneil Jeffrey (2/15) and Rayshorn Durrant (2/24) confining them to a miserable day.

It was the second win for Team Rivals on the weekend after registering a 10-wicket victory over Radcliffe TOO at the main Arnos Vale Playing Field in an 18-over affair.

FLOW Radcliffe behind former SVG U19 captain Romano Pierre’s impressive 86 reached 151/3 in their 18 overs. The lefthander struck three fours and six sixes off the sixty balls he faced. Wayne Harper made 30. Shem Browne took 2/36 to be Owia’s best bowler.

The Owia batters with Dean Browne and Emron Lorriaine both getting 25 and Rohan Lavia 24 put in a game but futile effort and were dismissed for 114 in 16.4 overs as left-arm spinner Andy Harper (2/20) and medium pacer Lindon James (2/20) both took two wickets.

Guardian General Saints then found themselves in the dicey position of 57/4 in the 9th over before Sween who struck three sixes and two fours and the experienced Currency (3×4) joined forces. Anthonio Barker 3/31 led the bowling.

Police TWO recorded a 92 run victory over Radcliffe TOO at the main Arnos Vale Playing Field on Sunday but it looked far from the “walk in the park” it eventually turned out to be in the opening scene.

They were precariously perched at 10/3 in the third over, as their top order took on the approach of a target-less firing squad-firing shots at anything that moved shadows included. Danson Andrews (31) and Parnel Browne staged a mini recovery in taking the total to 55 before the former went.

Canute Williams took 3/42 and Mickron Mc Dowell 2/38 for Radcliffe TOO, who were then bowled out for 87 with Browne 2/17 and Sylvan Spencer 2/21 leading the Police TWO bowling.

In other results Owia Stars defeated Strike Eagles by 54 runs in there match at Arnos Vale TWO.

Strike Eagles had their first victory of the competition with an upset win over Triumph United, defeating them by 40 runs.