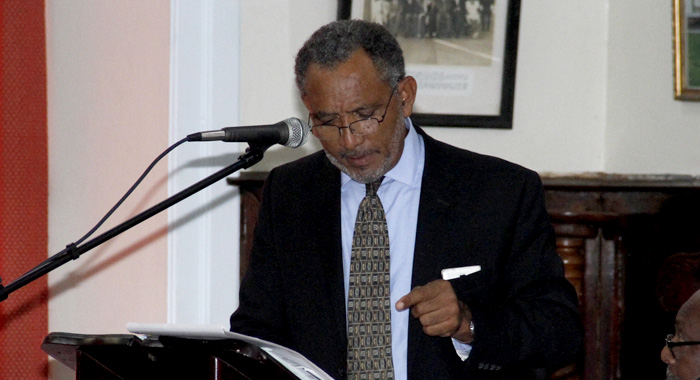 Monday’s debate of the Estimates was Friday’s first as Leader of the Opposition. (iWN photo)

Some political observers in St. Vincent and the Grenadines were left lost for words with the response, on Monday, of Opposition Leader Godwin Friday to the Estimates of Income and Expenditure for 2017, his first such debate in that position.

Friday, who has been an elected Member of Parliament since 2001 and became Leader of the Opposition last November, waxed professorial, offering those who are “tuned in” a civics lesson on the importance of Estimates before focusing on tourism — “The ministry I am most familiar with”, which he shadows.

Some observers felt that the time spent doing this could have better been used to poke holes in the government’s fiscal package, which Friday presented as inflated.

In his opening comments, Friday said he would give a brief overview of his understanding of what the Estimates debate.

“And then I will proceed to deal with a broad brush on the economic issues to set a context for my analysis of the areas that are particularly within the portfolios that I have shadowed over the past several years in this honourable house.”

Friday told listeners that the Estimates are not intended to be “puffery or simply to advertise certain ambitions or positions within the various ministries.

‘They are intended to be based on very thorough analysis of what is required in the economy and so that when the figures are put forward, when the regular indicators are put forward, there is an idea that they would be able to meet them,” he said.

The opposition leader told Parliament that he has said over the years that “the estimates have become almost like … guesstimates as to what the government intends to do rather than being thoroughly grounded in what is possible and what is real and ought to be able to guide not just the public servants but the private sector in what the economy would do and what the government would do in order to assist them.”

He said he has paid attention to the ability of the government to finance its activities, most notably “the creeping increase in the current account deficit that has occurred over the years”.

Friday said there is a tendency to be impressed when there is a large figure for the budget, noting that the 2017 Estimates total EC$976,943,437, a 7 per cent increase over the approved Budget for 2016.

Friday said the government always falls short of spending the amount under the capital budget, and those targets are not met under the everyday functions of institutions because they are not familiar.