‘There’s simply too much violent crime in SVG’ — PM Gonsalves 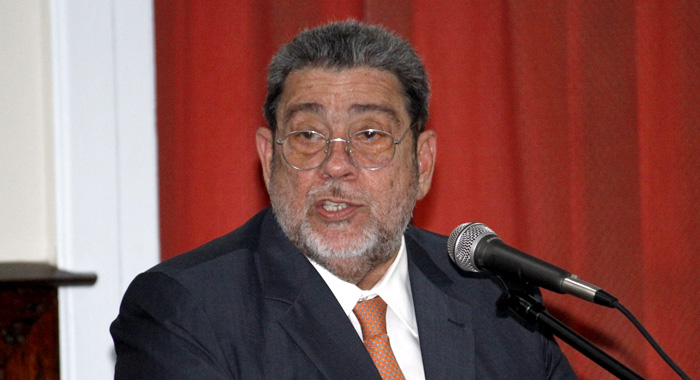 Prime Minister Dr. Ralph Gonsalves says the accounts for AIDC do no not have to be brought before Parliament. (iWN Photo)

There is just too much violent crime in St. Vincent and the Grenadines (SVG), although the country remained basically safe and secure.

That was the conclusion of Prime Minister Ralph Gonsalves, voiced in his budget presentation on Monday.

Gonsalves, who is also Minister of National Security, said that the primary obligation of the State is to provide an appropriate and effective framework for an acceptable level of citizen security.

“Citizens and visitors to St. Vincent and the Grenadines must be made to feel reasonably safe and secure in their homes, their places of work and at leisure, and as they generally go about their lawful business in a free society,” he told Parliament.

“There is simply too much violent crime in St. Vincent and the Grenadines, even though we remain basically a safe and secure country,” adding that it is no comfort or excuse for it to be said that the Caribbean and Latin American region and the world have grown increasingly violent, “though admittedly we live in a dangerous regional and hemispheric neighbourhood”.

The prime minister said that SVG is overwhelmingly a law-abiding society.

“We are an educated and disciplined people.  We have a sound system of law and order; and the Police Force is reasonably resourced with personnel and equipment.  Yet, we have a level of criminal violence, perpetuated by a small minority, in our country; this is deeply troubling.  We must do much, much better, in curbing the incidence of criminal violence committed by this hardy minority.  I take this matter very seriously,” Gonsalves said.

In the address, he described some police officers as “possessed of a sedentary public service mind-set, trotting out lame excuses for their failure and/or refusal to do their duty with any sense of urgency or at all”.

He said it is correctly and widely accepted that the fight against crime is not in the province of the State apparatus alone.

“This fight is an all-encompassing enterprise involving the State institutions, the family, church, school, community, the mass media of communication, civil society, private security firms, businesses and labour, and individuals themselves in a partnership with appropriate regional and international institutions and government.  We must all be on the same page in this fight within the context of a democratic society.

He said that the Police Force has a total of 1,061 persons and, in the 2017 Budget, the functional classification, “Public Order and Safety”, has an allocation of EC$63.8 million or 9 per cent of the total recurrent budget, inclusive of amortisation and Sinking Fund contribution.

Gonsalves said that the National Strategy on Crime Prevention approved by Parliament in 2003 has been updated and refined on an ongoing basis.

The strategy and consequential Work Plan have been, and are being, implemented.  But any Strategy and Work Plan must be effected in practice by real flesh-and-blood beings, and better can always be done, Gonsalves said.

He detailed some of the initiatives that his Unity Labour Party government has undertaken over the past 16 years to build the anti-crime fighting apparatus of the State.

“As a mature people we must acknowledge that some persons, mainly a small minority of young men, are bent on a life of crime.  Their impulses and predispositions towards criminality, and corresponding criminal activism, are many and varied,” Gonsalves said.

“Excuses must not, and cannot, be made for such persons particularly those who have no regard whatsoever for human life.  We must focus on being tough on crime and tough on the causes of crime.”

The prime minister said that in this “mix, of especial concern, too, is the violent offender who is mentally twisted or deranged.

“In this regard, the Mental Health Services must work very closely with the Police, the Prosecutors, the law courts, and the Prisons.  Often this is not done well enough or at all; the consequences of any neglect in this regard can be deadly,” Gonsalves said.