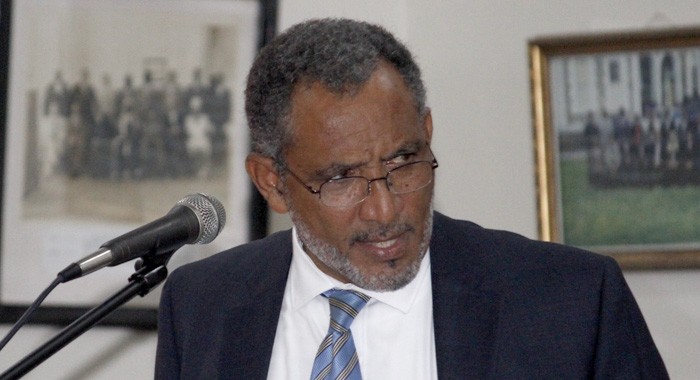 Leader of the Opposition, Dr. Godwin Friday responds to the Budget on Tuesday. (iWN photo)

Leader of the Opposition, Godwin Friday, has expressed disappointment with the Budget that Prime Minister Ralph Gonsalves presented to Parliament on Monday, saying that it does not offer hope to the Vincentian populace and economy.

“This budget, it does not offer any hope for the young people of this country. In fact, it’s taxing them even more,” Friday said in his response to the fiscal package on Tuesday.

He added that the 2 per cent levy on incoming calls and data usage, in addition to the same levy on outgoing calls imposed last year, will affect the young people more than any other age group.

Friday expressed hope that Minister of Agriculture and Fisheries, Saboto Caesar, says something about the sectors when he speaks on the budget, but added that the minister’s words carry less weight than the Prime Minister and Minister of Finance’s budget statement.

The opposition leader said that Prime Minister, Ralph Gonsalves, spoke about the long delayed, EC$700 million Argyle International Airport, which opens next Tuesday, “But only to boast about its completion and its opening; not to tell the nation about how we would benefit from it; what we are going to do, going forward.”

Friday said the budget address does not give account for the failure of the Buccament Bay Resort, which has been shuttered since last December, after months of being unable to pay staff.

“This, again, was the flagship project in terms of private sector investment,” he said, adding that the government had twinned the airport and the resort as two sides of the same coin.

“The airport is opening, and now, Buccament Bay has gone belly-up. So you are bringing the people in and they still can’t stay there.”

He said the budget fails by condoning waste and doesn’t inspire confidence with respect to Blacks Sands Villas and Resort, a Canadian investment at Mt Wynne-Peter’s Hope.

Friday said the Budget says absolutely nothing about the Ottley Hall Ship Yard, adding that there was “not even a comment on the labour dispute that took place there last December.

“Are the workers not important? Does a government not care about the Ottley Hall marina anymore?”

He further said that the budget offers no resolution to the contention between developers and the people of Canouan regarding the use of public spaces.

“What is clear in this budget, however, is that it taxes people more through the VAT and through the 2 per cent levy [on telecommunications]. That is transparently clear. There is no doubt about that.

“I don’t support the budget for those reasons.”

Friday said the government owes it to the people, in the budget, to say that it knows the difficulties that the population is facing in the various areas of the economy and how it plans to assist.

“This is what a budget is supposed to do, Mr. Speaker. And this budget has failed to do that. And what’s more, it is penalising the people of this country with the extra taxes that it is going to impose.

He said the budget has failed to give the nation the confidence with respect to the Argyle International Airport, which opens next Tuesday with chartered international flights.

“But, in the meantime, we are going to, Mr. Speaker, have to be paying a high price for it and still have to be questioning the return.”

Friday reiterated his wish that the airport succeeds.

“I really do, because as I said earlier on, failure is not an option,” he said, adding that there are airports in other countries that have failed.

“But these are not singular projects that can ruin the economy of a country. This one has that potential, which is why I don’t want to see it happen.  As a patriotic Vincentian, as somebody who loves my country, I want to see good for my country.”

Friday expressed “disappointment” with the budget, saying that the fiscal package does not outline the government’s plans for most of the important productive sectors of the economy in 2017.

An estimated EC$747.3 million will go towards recurrent expenditure, inclusive of Amortisation and Sinking Fund contributions and capital expenditure of EC$229.5 million.

The budget is financed by current revenue of EC$590.7 million and capital receipt of EC$368.2 million.