PM says airport opening will not be political rally 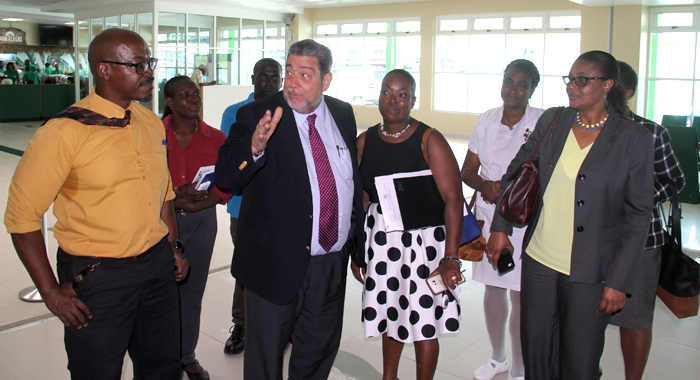 Prime Minister Ralph Gonsalves interacts with persons touring a tour of the terminal building of AIA on Wednesday. (IWN photo)

Prime Minister Ralph Gonsalves says next Tuesday’s official opening of Argyle International Airport will be a national event rather than a political rally.

In a Facebook Live interview with iWitness News at the International Departures hall of the airport on Tuesday, Gonsalves said that even persons who have been critical of the project should attend next week’s event.

He said the parliamentary opposition has been invited as well as all heads of Government of Caribbean Community nations.

Asked what he would say to persons who might have been sceptical or opposed to the airport, Gonsalves said:

“There is only a small minority who would still be in the position that ‘I opposed that thing from the beginning, is Ralph build it, I ain’t coming.’ But, the vast majority of people are open to come. Not that all of them would necessarily come,” he said.

“I don’t think most of these 18 people from the Black Point Golden Years Activity Centre probably would be here,” he said of a group of senior citizens who were touring the airport terminal building at the time of the interview.

“It’s a regional event and also international,” Gonsalves told iWitness News, adding that president of the International Civil Aviation Organization (ICAO), Olumuyiwa Benard Aliu will be among the dignitaries.

The EC$700 million airport, which has provoked various strong political reactions across the political divide, is opening six years behind schedule.

But since the opening date was announced late last year, Gonsalves has called on nationals to abandon their political or other positions and rally behind the project.

On Tuesday, Leader of the Opposition, Godwin Friday, said that while his New Democratic Party remains critical of the manner in which the government handled the construction of the airport, it is too big an investment to allow to fail.

Friday called on the nation to rally behind the airport to ensure its success.

Gonsalves told iWitness News that he “absolutely” gets a sense that the majority of the nation agrees that to the extent that the airport has been built, it must be made to succeed.

He was, however, sceptical of Friday’s comments, telling iWitness News:

“So, I am happy to hear what Lorraine Friday said yesterday but I also know other things that he says. What he said yesterday and what he has said in the past.”

Gonsalves said Friday has “bought hook, line, and sinker” two theses about the airport: one that it will never work, and the other that economically and socially, it is a drain on the country.

The prime minister said that the very fact that all opposition lawmakers have been invited to the opening shows that it is a national event.

He said he believes that MP for Central Kingstown, St. Clair Leacock, who has publicly congratulated the government on the construction of the airport, will attend the opening.

The prime minister was, however, unsure about whether the opposition leader would attend.

Gonsalves said no member of the opposition has been invited to speak at the event.