Has Leacock thrown in the towel on the NDP? 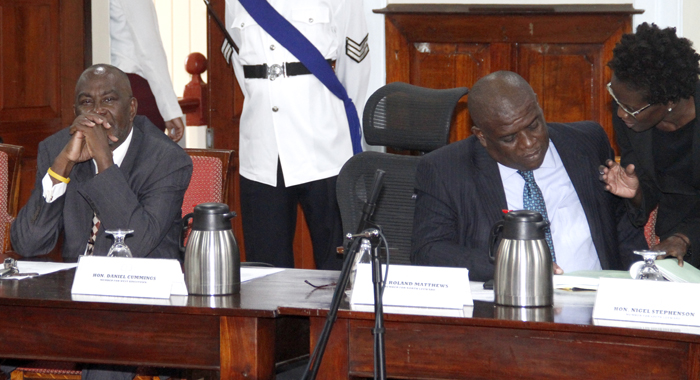 A pensive Leacock, left, in Parliament as Matthew and Barnwell interact ahead of the Budget Speech on Monday. (iWN photo)

Vice-president of the New Democratic Party, St. Clair Leacock on Thursday announced that he will not attempt to retain that position when the party holds its convention on Sunday and has further suggested that he will part ways with the party.

Leacock made the announcement in Parliament just over one week after telling iWitness News that he was “very confident” that he would retain the post.

His announcement comes amidst a challenge from Member of Parliament for North Leeward, Roland “Patel” Matthews and NDP senator, Sherlan “Zita” Barnwell, for the two vice-president positions.

Leacock seemed to have hinged his decision to stand down based on Barnwell’s entry into the race.

“I will not compete. I will stand up and decline. So, next Tuesday, you shall not only have a new airport, but you will also have a new New Democratic Party, because the Major will find a different way to serve in the political equation of St. Vincent and the Grenadines,” Leacock told Parliament.

The long-delayed Argyle International Airport will open with an official ceremony on Tuesday.

All opposition lawmakers have been invited to attend the event and the government has expressed confidence that Leacock, who recently congratulated the government on the completion of the airport, will attend, even if other NDP lawmakers don’t.

Some persons interpreted Leacock’s announcement in Parliament on Thursday as an indication that he would join the government.

He had told iWitness News last week that he had never considered joining the Ralph Gonsalves administration, of which he had remained, until late last year, a vociferous critic.

Thursday’s development in Parliament is the latest in a saga that began last year when then NDP leader, Arnhim Eustace, suddenly announced in November that he had decided to stand down as party leader and Leader of the Opposition, after 16 years.

Leacock had presented himself and many persons had come to accept him as Eustace’s successor.

However, the NDP’s parliamentary caucus elected the NDP’s other vice-president, MP for the Northern Grenadines, Godwin Friday, as opposition leader and Friday went on to become party leader after Leacock exited the race just before it was put to a vote at an extraordinary convention in late November.

Leacock seems to be drifting further away from his party since then.

Some political observers have said that many NDP supporters lost faith in Leacock in light of his comments and action since the leadership transition.
They say that Barnwell’s candidacy would have decided either Leacock or Matthews’ political future.

Matthews retained the North Leeward seat in the December 2015 general election, staving off by just 12 votes a challenge from the ruling Unity Labour Party’s Carlos James, a first time candidate.

They say that election to the vice-presidency of the NDP could help his chances at the next poll.

With Leacock’s decision announced on Thursday, the nation would never know if he — some say, again — has chosen the easy way out in the face of defeat.

3 replies on “Has Leacock thrown in the towel on the NDP?”