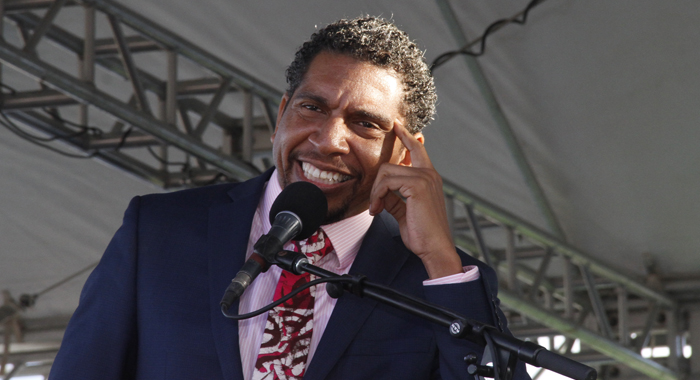 Minister of Economic Planning, Camillo Gonsalves, used his speech at Tuesday’s rally in celebration of the opening of Argyle International Airport to rally Vincentians in support of the most expensive piece of public infrastructure in the nation’s history.

“If we work together to make this airport a success, it will be impossible to separate it from the increased economic growth and development that await us,” he told the thousand gathered in Argyle, where commercial flights, both regional and international, landed at the airport for the first time.

“As a vulnerable, open, small island economy in a new era of globalisation, a quality international airport is an essential cornerstone of any modern developmental aspiration,” said Gonsalves, who is also minister of sustainable development.

“Today, as the minister with responsibility for economic planning, I am acutely aware of this airport’s potential to act as a force multiplier in our developmental efforts. Tourism, agriculture, services, and foreign investment all stand to benefit from the further integration of St. Vincent and the Grenadines into the global economy, as this airport will eventually facilitate.”

He said that while in many countries an international airport is just a place to catch a flight, in St. Vincent and the Grenadines, it is “a monument to Vincentian ingenuity, hard work and sacrifice.

“It is both a lesson and a teacher. It is a brick and mortar manifestation of the potential for greatness that resides in the breast of every citizen,” he said, adding that a typical young New Yorker or Trinidadian would shrug disinterestedly if asked how their international airports came into being.

“Ask a Vincy — today, tomorrow, or generations hence — and they will proudly tell a thousand tales of toil and triumph,” said Gonsalves, who spoke of his “insignificant” contribution to the project — first, as a lawyer, negotiating the purchase and relocation of Argyle residents and advising the International Airport Development Company, and then, as an ambassador and Minister of Foreign Affairs, rallying nations to the cause and traveling the world in search of support.

He said the capacity to translate vision into reality is the distinguishing characteristic of a true leader.

“And when that leader’s vision allows him to see the invisible, and inspire the impossible, present and future generations are immeasurably enriched. Every Vincentian – home and abroad, irrespective of political persuasion – knows in their bones that the vision and leadership of one singular individual took our collective dream and turned it into a tangible truth,” Gonsalves said.

He noted that many persons doubted that Prime Minister Ralph Gonsalves could deliver on his promise of an international airport in St. Vincent and the Grenadines.

“Even after delivering a jetport in Canouan, a bridge across the Rabbaca Dry River, and revolutions in housing and education, there were still many doubters among the believers. Even when the mountains became memories, and the ranks of the believers swelled, some scribes and naysayers continued to unleash tsunamis of criticism and predictions of failure, while scoffing at his heroic efforts,” Gonsalves said.

He told the gathering, which included regional and international heads of state and government and other dignitaries that “patience and perseverance overcame every struggle and setback.

“This project taught us the truth in the old adage, that without a struggle, there can be no progress. Progress came incrementally, but inexorably; one truckload of dirt at a time. And we persevered, unflaggingly confident in that knowledge that the seeds we sowed would be reaped in due season. The stones thrown by critics were crushed to pave a 9,000-foot runway. The bricks hurled by naysayers were used to build the most beautiful terminal building in the Caribbean,” Gonsalves said.

The Argyle International Airport was constructed at a cost of EC$700 million, including EC$400 million in debt, according to government figures.

It boasts a runway that is 9,000 feet long and 150 feet wide and the terminal building has been designed to process 1.5 million passengers annually.

The project was completed six years behind schedule, and at almost double the price tag of when it was first announced in 2005.

Gonsalves said the airport was built during the worst global recession in living memory.

“It was funded in in era of regional job cuts, late salaries and wage freezes. It was equipped while the IMF (International Monetary Fund) was opening branch offices and imposing austerity across our Caribbean capitals. Its completion has not come without cost; from the financial to the environmental to precious human life. We have missed deadlines and tried patience. But while the tree of patience grows in bitter soil, it bears the sweetest fruit. Today, we savour that fruit, before we begin work anew to make this Airport an operational success,” he said.

He said that in the “future struggles to make this airport work for the benefit of all Vincentians, the critics will re-emerge to play on the basest elements of the human spirit. Bitterness and shame may banish them temporarily from our front pages, but there will be days — not today, but not far off — when the scoffers and doubting Thomases emerge from their dark caves of pessimism to fan the opportunistic embers of division or attempt to impose their own defeatism and inferiority complexes on the national psyche. We must stop them, and we must remind them that those who lack the courage to pursue their dreams should get out of the way of those who seize the day.”

Tuesday’s rally was the second of two events to mark the opening of the airport.

The airport was commissioned on Monday with a flag raising ceremony that heard addresses from Prime Minister Gonsalves and other officials.

The airport began operating Tuesday morning with LIAT making the first commercial departure, followed shortly after by a chartered Dynamic Airways flight from New York as the first international arrival.

There was also a Sunwing chartered flight from Toronto, Canada, and a Caribbean Airlines charter from New York.

There have been no announcements yet, by international carriers to make regularly scheduled flights to Argyle.