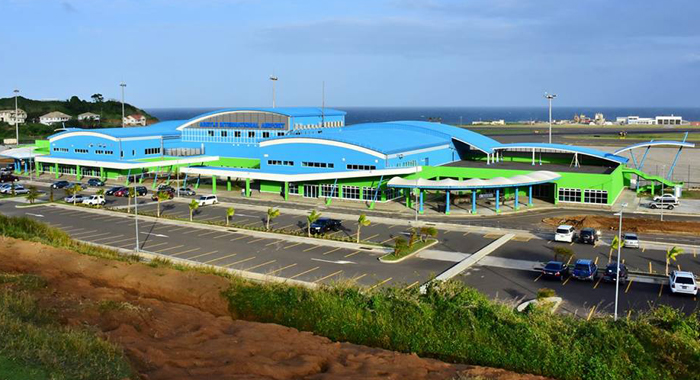 Prime Minister, Ralph Gonsalves, says while a plaque recognising the generous donation from Taiwan has been erected inside the terminal building of Argyle International Airport, he would like the president or foreign minister from that Asian ally to visit and erect a larger one.

“But there will be a bigger plaque and I’m hoping that either the president of the Republic of China or the Foreign Minister would come to put that plaque in one of the halls at the terminal building. We must be grateful and we must be thankful,” he told a rally on Tuesday to celebrate the beginning of operations at the EC$700 million airport.

Taiwan financed the construction of the US$28 million terminal building, the single largest and most advanced infrastructure that Taiwan and St. Vincent and the Grenadines have built together since diplomatic ties were established in 1981.

The Taiwanese Overseas Engineering Construction Company (OECC) won the bid to construct the terminal building, the construction of which started in 2011 and was completed, slightly ahead of schedule, in December 2013.

He said that through consultations and deliberations between both sides, CECI Engineering Consultants– one of the major engineering consulting firms in Taiwan and the company that was responsible for designing the building — developed the draft to pay homage to the beauty of SVG and “the high-flying dreams of its people”.

“Looking at this building, I am sure you can tell the concepts incorporated in the design invoke the images of the vast blue sea surrounding SVG and a seagull spreading its wings.”

He said the contours of the blue roof represent the ceaseless tides and waves of the Atlantic and the Caribbean Sea.

“This echoes the respect for the abundant resources that Nature has endowed St. Vincent with, and the Vincentians’ aspiration to foster environmental-friendly eco-tourism,” Ger said.

The ridges of the roof are extended at both ends to bear resemblance to the wings of a great Vincy seagull, poised to take off to a limitless blue sky, he told the thousands of persons who came out to the ceremony in which the national flag was raised and a plaque unveiled to mark the commissioning of the airport.

“In the spirit of this symbolism, I am confident that this terminal and the airport will carry St. Vincent and the Grenadines to the next stage of its prosperous future.”

Ger said that with the successful completion of the airport, more and more airlines are expected to operate direct routes between Argyle and other international major airports.

“Consequently, more tourists will be able to visit and enjoy the beauty of St. Vincent and the Grenadines.  Convenient air access will also attract more businesses to come and explore the trade and investment potential in this country.

“The opening of AIA is just the beginning.  Starting tomorrow, the doors of SVG will open even wider for better and sustainable growth,” he said in reference to Tuesday, when flights began operating from the airport.

On behalf of President of Taiwan, Tsai Ing-wen, as well as that nation’s Government and people, Ger congratulated all Vincentians on the opening of the Argyle International Airport.

“We wish that a successful operation of the airport will lead to further prosperity in St. Vincent and the Grenadines in the years to come.”

In his address on Tuesday, Gonsalves also thanked  Venezuela and Cuba for their contribution to the airport.

More than a hundred Cubans worked on the airport, which was designed in their nation’s capital and more than one-third of the EC$700 million spent to build the airport came from loans from Venezuela.

Gonsalves also thanked Trinidad and Tobago, whose government, under former Prime Minister, the late Patrick Manning, gave US$10 million to kickstart the construction of the airport.

Gonsalves said that photos of Manning, along with late Cuban President, Fidel Castro, and late president of Venezuela, Hugo Chavez, have been erected in the terminal building.