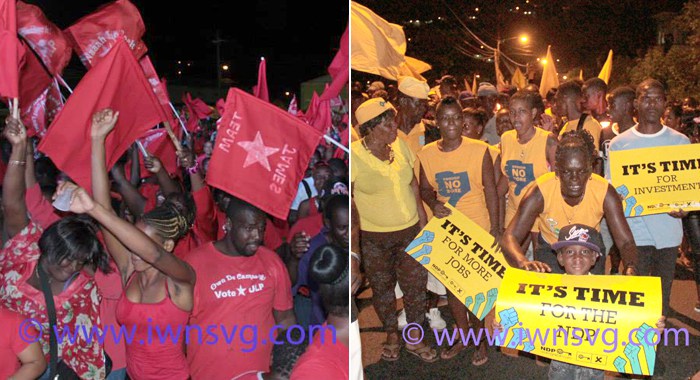 Former opposition senator, Linton Lewis, aimed his last address as chairman of the main opposition New Democratic Party (NDP) at reducing political tribalism in St. Vincent and the Grenadines, saying that supporters on all sides of the political fence are often too suspicious of bi-partisan actions.

“Political battles must not be conducted with the intensity of a tribal warfare and neither must they engender hatred, resentment and strife among the people of this country,” he told the NDP’s 39th convention in Layou last Sunday.

“In terms of opportunities and services, we must not see each other as NDP or ULP (Unity Labour Party),” Lewis told the convention, which was held under the theme, “Moving Forward Together, One Nation, One People, One Vincy”

He said that Vincentians must not feel that when the political party they support is the governing party that they automatically have a greater entitlement than the supporters and members of the opposition party.

“Supporting the governing party, whether NDP or ULP, is not a first class ticket to the country’s resources and opportunities and neither is a party card a title deed to the country’s assets. If we are convinced that we are one people, one nation, one Vincy, then we should seek to convince others to be the same,” Lewis said, adding that it will be impossible to use the nation’s best human resources to develop this country if only those we are perceived as having voted for a particular party are accommodated.

“Just imagine what will happen to a ULP Minster of government who attempts to be interviewed on NICE Radio,” Lewis said of the pro-NDP radio station on which the party’s programmes are broadcast.

“What do you think will happen to an NDP candidate is interviewed on Star Radio?” he said, referring to the ULP’s radio station.

“Those who are consumed with hate, those who have their misguided prejudices and those who are divisive by nature will be highly critical of both the NDP and ULP candidates for different reasons. In those circumstances can we truly say that we are one people, one nation and one Vincy?”

“On the other hand, some ULP supporters will anticipate sabotage, grumble that he or she is not one of them and, in some instances, others will praise the appointment in such a way that it casts doubts in the minds of supporters of the NDP whether the person was ever an NDP supporter after all. Such is the socio-political paradox under which we exist and which has the effect of retarding growth. Aren’t we the architects of our own demise?”

Lewis said that the NDP argues about the downfall of the agricultural sector. He presented the hypothetical scenario in which any prominent business person who is a strong supporter of the NDP would travel with the Minister of Agriculture to secure markets for the nation’s agricultural products and asked two questions.

“Won’t that businessman consider the tongue lashing that he will receive on the radio and the ridiculous remarks that will be written on Facebook before he makes a decision to travel in the interest of the country as a whole? And what about the ULP supporters, won’t they oppose the decision on the basis that one of their own should accompany the minister to go looking for markets abroad?

“The governing party and the opposition supporter will always be reluctant to co-operate solely in the interests of the country because of political tribalism and the war of attrition. Yet we speak about one nation, one people, one Vincy.”

Lewis said that St. Vincent and the Grenadines may have the potential to grow but the retardation should not only be measured by the lack of natural resources or its physical size.

“The greatest resource of our country is, unfortunately, the primary reason for our country’s economic problems. I am sure that you will agree with me that our soil is fertile and that we have the capacity to feed ourselves and to add value to some of our agricultural produce if all farmers, NDP and ULP are given equal opportunity to farm and to produce.

“There are indeed plenty of fish in our waters. It cannot be contested that we have a fantastic tourism product with our beautiful beaches with pristine, clear waters and different coloured sands ranging from white to brown and from not so brown to black.  Our rugged mountains, our verdant hills and our singing rills and as the poem says, our woods of sweet perfume, nestled between a healthy green vegetation that provides the natural habitat for eco-tourism to thrive with impunity.

“With nature’s gifts in abundance, can any NDP or ULP government exploit them to maximise their returns without the involvement of supporters from the other side? Herein lies the need for One Nation, One People and One Vincy to demonstrate a level of maturity that will redound to the benefit of everyone,” Lewis said at the convention at which he announced that after 10 years in that post, he would not seek another term as NDP chairman.

Member of Parliament for West Kingstown, Daniel Cummings, was elected unopposed as chairman of the party.