Team Rivals, Victors 1 move ahead of the pack 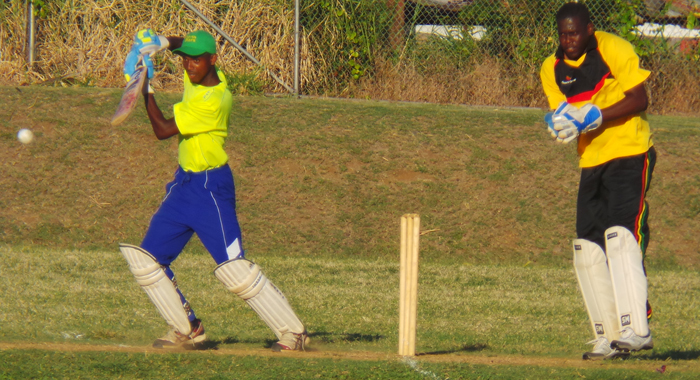 Victors 1 opener Atticus Browne caresses the ball through the covers.

Former champions Team Rivals continued their assured steps towards another lien on the National Lotteries Authority Neil Williams 20/20 cricket title with contrasting wins on a weekend while another former champion, Victors 1 also put themselves on the path to battle for the title.

Team Rivals who were dethroned by FLOW Radcliffe in 2016, exacted a measure of revenge on their opponents with a 12 run victory behind top class performances by Hyron Shallow and Deighton Butler at the main Arnos Vale Playing Field on Sunday.

Teams Rivals whose captain Casmond Walters called correctly and chose to bat cut and thrust their way to 122 in their 20 overs, thanks to another good innings by Shallow whose 55 was almost double the next best score in the match. He struck nine fours most of them on the offside in another innings which was a cut above the rest and took him past 400 runs for the competition.

Walters made 24 and looked on his way to another good score before going by the runout route after a bad mix-up with Shallow saw him failing to make his ground by some distance.

Dyke Cato collected 3/23 with his offspin while left-arm spinner Andy Harper took 2/16 bowling for FLOW Radcliffe. The defending champions, looked to be well on the way to earning a comfortable victory at 58/2 at the end of the 12th over. However the match was turned on its head in over number 13 when Butler with his left-arm spin collected a Hattrick.

Butler finished with 4/11 as he bowled current SVG Under 19 captain Othneil Lewis (three) as the batsman attempted to play to leg. Captain Lindon James (31) got the topscore but was sent packing by West Indies T20 pacer Kesrick Williams (1/23) as he set about trying to take his team home. Gidron Pope (one, SR 14.29) was never allowed to get away and was caught at mid-off of the impressive and pacey Obed McCoy (1-14). McCoy, who like Pope was part of the West IndiesU19 team to the 2016 ICC Youth World Cup, before returning home with an injury, extracted good pace bounce in what was his last match before heading off to Barbados to prepare with the Vice-Chancellor’s XI to oppose England.

Providence Electronic Solutions North Leeward were undone by the spin of Team Rivals and could only manage 80 in 17.5 overs. Walters making up for his failure with the bat took 4/13 and Jackson 2/10.

Victors 1 lined up position to land on a spot in the final after winning their first three Super Six round matches.

On Saturday, they were led to an 8-wicket win over Guardian General Saints by an impressive unbeaten half century from enigmatic Atticus Browne at Arnos Vale TWO.

Guardian General Saints reached 150/ 8 in their 20 overs, with Seon Sween getting 68 and Sunil Ambris getting 28 in his first knock since his impressive outing in the West Indies Super50. Sweene struck four fours and six sixes while Ambris had four fours and one six-the pair adding 55 for the second wicket after their team had slipped to 5/2.

Alston Bobb continued his good form with the ball taking 3/28 with his left-arm spin while pacer Norlan Williams took 2/10 bowling for Victors 1. Victors 1 in reply reached 151/2 in 17.4 overs with Browne 69* and Miles Bascombe 42 featuring in a 96 run second wicket partnership.

Browne was at his veritable best in the month of love, as he unfurled some exquisite drives that saw “willow kissing leather” before skipping off into blissful glee to nestle in the grass next to the boundary ropes. He counted six fours and added two sixes to show that “love was in the air”, while Bascombe added a solitary four which was girded by four sixes. Rolando Wright (2/19) picked up the two wickets to fall.

Victors 1 also had the better of Smasher on Sunday- beating them by 103 runs at the Sion Hill Playing Field.

Victors 1 made 186 for 4 in 20 overs with Bascombe hitting 64 before being run out-taking his tally just short of 400 for the season- while Chrisroy John added 38. Marvin Harry was Smashers’ best bowler, taking 2/26. Smashers in reply were dismissed for 83 in 14.4 overs. Jordon Corridan top scored with 24 while the Bobb 4/21 was again the leading wickettaker with Shaquille Browne (2/13) and Norlan Williams (2/17) getting among the wickets as well.

The two remaining rounds of Super Six games will be played this weekend of Saturday 25th and Sunday 26th February before the Final on March 4th. The two top teams from the Super Six will contest the Final.

The SVG Cricket Association Inc said If the Final is abandoned due to rain,  the winner will be the team with the most points From the Super Six round. And if that remains equal, then Net Run Rate will separate the teams.