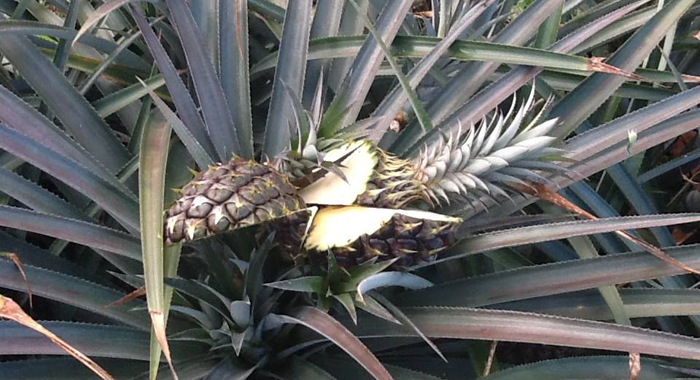 Vandals chopped up 1,500 pineapples on the farm.

Vandals struck Emerald Valley Pineapples, a farm located in the Francois Valley in Vermont earlier this week and destroyed 1,500 fruits worth some EC$22,000.

Stephen Watson, who manages the farm that is located on lands owned by his wife’s family, told iWitness News that the situation is becoming very frustrating.

Watson has also been experiencing praedial larceny on his farm with the last major raid being on Oct. 27 last year.

But, sometime between Sunday evening and Monday morning this week, vandals struck again, this time attempting to set his shed on fire and chopping some 1,500 pineapples, which were at various stages of maturity.

“This morning around 8 o’clock, I went up to my farm to discover that an attempt was made to burn down my shed. I further noticed that a large number of pineapples in the field were maliciously vandalised,” he told iWitness News, adding that a count showed that some 1,500 pineapples were chopped up.

He said he reported the development to the    Vermont Police Station and two police officers accompanied him back to his farm.

They assessed the scene and made notes and later took a statement and told Watson that investigations will be conducted.

“I am so exhausted from putting in so much hard work and at the end of the day making a loss. I also feel as if my life is at risk,” said Watson, who said he will improve security at the farm in light of threats he has received.

“Over the past three years, I have been experiencing breaking and entering, theft and vandalism to my property and produce. I have also received threats on my life,” Watson said.

“… I would like to know if anyone can help me, or advise me with what to do next, because this is overbearing and I am running out of options,” said Watson, who has also reported the development to the Ministry of Agriculture.

Because of losses as a result of theft and vandalism at the farm, Watson said he has had to lay off one of the two full-time employees at the farm.

He said he might now be forced to cut his employee’s workweek to three days in light of the most recent losses.

Watson, who is originally from England, says that persons who he suspects are involved in the vandalism have told him that he should go back where he come from.

He, however, said that he intends to continue with his farming, noting that his family and life is now in St. Vincent and the Grenadines.

This is the second time in less than three months that iWitness News is writing about vandalism at Emerald Valley Pineapples. Watson first told us of the vandalism and theft at his farm in early December 2016.

(Watch below our interview with Stephen Watson last November.)

One reply on “Vandals destroy $22,000 in pineapples at Vermont farm”