Sir James wants NDP to rid itself of Eustace’s image 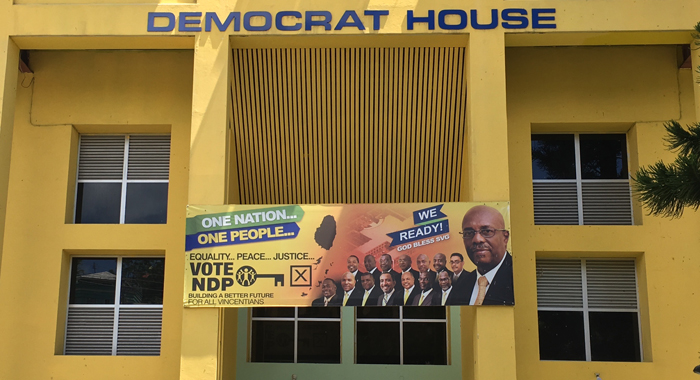 Sir James says that this billboard should be removed from outside Democrat House, the NDP’s headquarters. (iWN photo)

Former prime minister, Sir James Mitchell, says the New Democratic Party (NDP) should rid itself of the image of its former leader, Member of Parliament for East Kingstown, Arnhim Eustace.

Eustace led the NDP from October 2000 to November 2016, during which time the party suffered four consecutive electoral defeats.

Speaking on Xtreme FM on Tuesday, Sir James, who founded the NDP in 1975, also said the public should allow the new leadership of the NDP to prove themselves.

Last November, the NDP elected Godwin Friday, then one of the party’s two vice-presidents, to replace Arnhim Eustace as its leader.

Friday’s parliamentary colleagues had already elected him leader of the opposition.

Sir James, who has had a strained relationship with the NDP since the 2010 electoral defeat, said he wishes the new leadership of the party every success.

Sir James said that as the NDP moves forward, it has “to put the image of Eustace’s leadership aside.

“Put that to bed,” he said and suggested that the party hang up a photo of Eustace inside its headquarters, Democrat House, and remove from outside the building the 2015 election billboard of photos of Eustace and the candidates in those elections.

Speaking at a press conference on Wednesday, NDP president, Godwin Friday, said that with time the party will remove the campaign billboard.

“Everybody expects that will happen,” he said.

“Mr. Eustace is a valued member of the New Democratic Party and he will continue to be that way. And in my approach to the leadership of the party, I reach out to everybody: some of the people who have become stalwarts of the party, some of whom have become less active, we want to engage them again and we want to keep the wisdom and advice of Mr. Eustace. You are talking about the public image, the posters and so, those would happen in time,” he said.

“That was put up there in the elections, if elections are called this year, it would come down quicker,” he said, reiterating the NDP’s hopes that the court will, next Tuesday, rule in the NDP’s favour on petitions the party has filed, challenging the results of the 2015 vote.

Eustace, who has been representing East Kingstown since 2008, has said that he will announce his retirement as MP for that district after a suitable replacement is found.

Sir James, under whom Eustace functioned as fiscal advisor and later Minister of Finance, suggested things that Eustace can do when he retires fully from politics.

“Eustace should do like me. He should go home and write his memoirs. After all, he has a lot to write about. He was with CDB (Caribbean Development Bank) and he could write all about CDB and how he helped the sugar industry to come to St. Vincent, why the sugar industry closed. He can talk about how he became a PS (permanent secretary) and who made him a PS and he could talk all about who got Carlyle Dougan to step down and give him a seat and he could also put in writing what he thinks about me,” a snickering Sir James said.

The retired politician said it is not for Eustace and the NDP alone to decide whether he should complete his current term as MP for East Kingstown, adding that the strength of the ruling Unity Labour Party will also determine that.

The former prime minister said that Vincentians have to bear in mind that when there is a one-seat majority, a motorcar accident can bring down the government and result in new elections.

“You have to bear in mind forces that you can’t control,” he said.

The ULP is into a fourth consecutive term in office, having won the December 2015 general elections by taking eight of the 15 parliamentary seats.
The remaining seven went to the NDP, but the party is challenging the results of the elections in court.