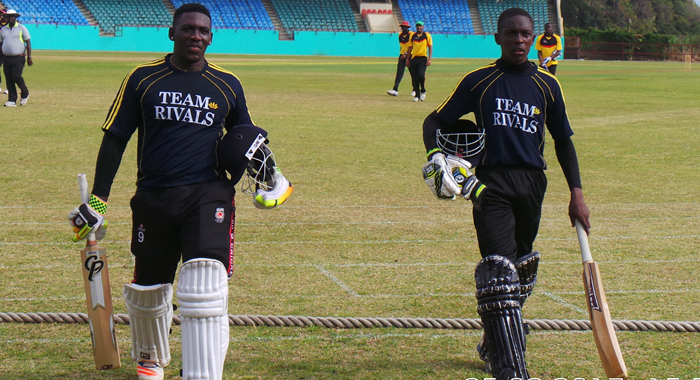 Casmond Walters 135*, left, and Dillon Douglas 43*after sharing in the 182* third wicket partnership.

Victors 1 and Team Rivals batting sensation Casmond Walters was in imperious form as they muscled their way onto the cricket summit with another outstanding weekend in the National Lotteries Authority Neil Williams T20 tournament.

Victors 1 romped into the final of the tournament after brushing aside defending champions, FLOW Radcliffe in a tricky Super Six match at Arnos Vale 2 on Saturday. And then claimed a telling psychological advantage, when they thrashed Team Rivals, their opponents in this weekend’s final by 9 wickets, in their last Super Six match — which was only of academic interest.

On Saturday, Victors 1 lost the toss and were asked to take first knock by captain Lindon James, who appeared uncertain as to what decision to make after calling correctly. This was evident by him calling to his teammates upon winning the toss to inquire “what to do”.

The early loss of Chrisroy John (7) with the total on 19 in the second over served as a minor hiccup to Victors 1 in their pursuit to exact revenge on a team who had humiliated them earlier in the tournament.

Atticus Browne (47) and Miles Bascombe then set about the bowling with ruthless efficiency in realising 72 for the second wicket in 8 overs to take the initiative from an already hesitant and uncertain FLOW Radcliffe.

The partnership was broken when Browne, who looked set for another afternoon of glory, was caught off the bowling of Gidron Pope. He struck 3 fours and 4 sixes off the 35 balls he faced.

Bascombe (56) then added his fifth half-century of the season on the way to adding 84 for the third wicket with captain Donwell Hector before once again going by the runout route. He struck 4 fours and a similar number of sixes and scored at a SR of 130, while pushing his aggregate to close to 450. Victors 1 then slipped from 175/2 to 180/6 to lose 4 or 5, including Hector for 38 and ended 195/6 off their 20 overs.

FLOW Radcliffe who behind a Gidron Pope century were 9 wicket winners when the teams met earlier, got off to a reasonable start when Romano Pierre (28) took 3 fours off the opening over bowled by Ray Jordan. Pope (8) at the other end was never allowed the liberties of the first encounter and dragged one onto his stump while attempting to charge Jordan. His departure signalled the end of the fight as FLOW Radcliffe surrendered meekly and were dismissed for 106 in 15.3 overs to give Victors 1 a comprehensive 89-run win.

The Victors 1 bowling was again led by Alston Bobb 3/22 with Ray Jordon and Shaquille Browne both with 2/17 and Kimson Dalzell 2/18 doing the damage.

In the nearby main Arnos Vale Playing Field, it was another day of the “Walters Pyrotechnics” as the batsman plundered a superb century off a star-crossed Guardian General Saints in helping Team Rivals to a 66 run win.

He was joined by SVG U19 wicketkeeper/batsman Dillion Douglas and the pair ate ravenously of the “buffet-style run feast” prepared by the Saints bowling in adding an unbroken 182* for the third wicket to see their team to 215/2 off their 20 overs.

Walters was the ruthless executioner even as he sported his perennial smile as spectators and fieldsmen alike followed the path of the ball sailing out of the ground or burning a path to the cover boundary. Douglas (43*) played a good supporting role but was still able to play some admirable shots, one of which, was a hook over long-leg for 6 off the nippy Kimali Williams.

Walters, for the second time this season, struck an eye-popping 11 sixes and counted a similar number of fours in recording his second ton of the season in conditions, which were tailor-made for such enterprise.

Guardian General Saints needing to score over ten an over, succumbed to the pressure and were only able to reach 149/7 in their 20 overs with extras contributing 38 and Teron Simon 25 as Walters returned to take 2/28 and left-arm spinner Rasheed Frederick 2/32.

On Sunday at the Sion Hill Playing Field in what was a dry run to Saturday’s final, Victors 1 brought Team Rivals crashing down to earth with a comprehensive 9-wicket win.

Victors 1 inserted their opponents after winning the toss and through tight and penetrative and tight bowling restricted them to less than six an over with only Walters showing the class and temperament to get the scoreboard going. He topscored with 57, which included 5 fours and 2 sixes and took his season tally to over 500 runs. Norlan Williams took 2/17 and Alston Bobb2/ 20.

Victors 1 then with Chrisroy John 59* and Atticus Browne 30 took 12.5 overs to reach 112/1 for a comfortable win and with it a confidence booster.

In other results, Smashers had a 36-run win over Providence Electronic Solutions North Leeward.

The final will be at Sion Hill Playing Field this Saturday from 2 p.m.