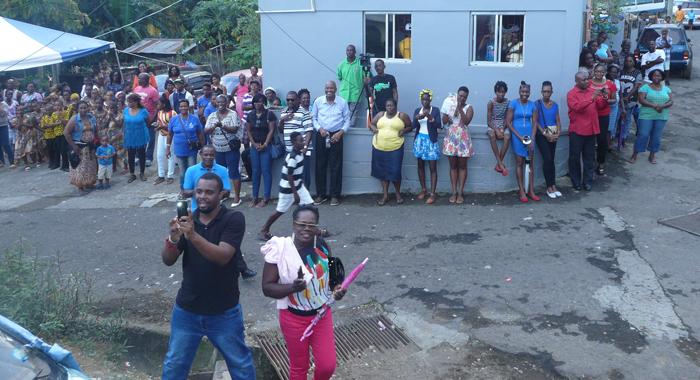 Residents of Victoria Village and surround areas at the concert.

As the Pan Against Crime Programme marked its 9th anniversary in St. Vincent and the Grenadines, Commissioner of Police Renold Hadaway said the programme has impacted the lives of many children and teenagers throughout the state and has revived people’s interest in the steel pan, once a diminishing art form.

Hadaway, addressing a gathering that attended the Pan Against Crime anniversary concert at Victoria Village on Sunday, said the steel pan, one of our cultural artforms, is used as a tool in the fight against crime and violence.

“This initiative, the Pan-Against Crime Programme, has impacted the lives of many children and teenagers throughout the state since its inception. They utilised their spare time learning to play the pan. It is the consensus of the people that this skill that they have harnessed has been a contributing factor to outstanding performances in Caribbean Primary Exit Assessment (CAPE) and other Caribbean Examinations Council (CXC) Examinations,” Hadaway said.

The Pan Against Crime initiative, the brainchild of Prime Minister Ralph Gonsalves was launched in 2008, as the Government looked at ways to combat the 2007 upsurge in violence and crime.

This initiative’s overall strategy includes: connecting with the communities through culture, music, sports, law enforcement and education. Throughout the years, several pan sides were launched. These include but not limited to Winfresh South East Steel Orchestra of Stubbs; North Stars which started in Rose Hall but has now moved to Troumaca; New Dimensions in Lowmans Windward soon to be housed at the New Grounds Primary School: Mustique Charitable Trust Georgetown All Stars; Genesis of Largo Heights; Union Island; Canouan; Marriaqua Government School and Sandy Bay.

“This initiative and the many other initiatives undertaken by the RSVGPF (Royal St. Vincent and the Grenadines Police Force) continue to impact positively on tomorrow’s generation. Let us all work together: parents, students, police and the wider community. Let us unite to curb the crime rate especially among our youths. Remember unity is strength and music unites us. As the famous playwright, William Shakespeare, stated in his play “Twelfth Night” “if music be the food of love play on,” Hadaway said.

“In conjunction with the National Commission on Crime Prevention, the RSVGPF facilitate the largest summer programme throughout the state. Accordingly, since the birth of the Pan-Against Crime Programme, hundreds of students throughout the country have mastered this once diminishing art form,” Hadaway said.

Meanwhile, George Frederick, deputy chair of the National Commission on Crime Prevention, encouraged the persons in attendance to speak out and let people know when they are on the wrong path.

Frederick warned that criminals who deprive people of their lives will face a judgment that is coming.

“To many men believe they own the women of St. Vincent and the Grenadines and beat them up. This must stop,” said Stephenson, who reminded the gathering that there is a domestic bill in place that has stiff penalties for people who break the law.

The curtains came down with a scintillating performance from Winfresh South East Steel Orchestra.

One reply on “Police chief notes significance of Pan Against Crime”