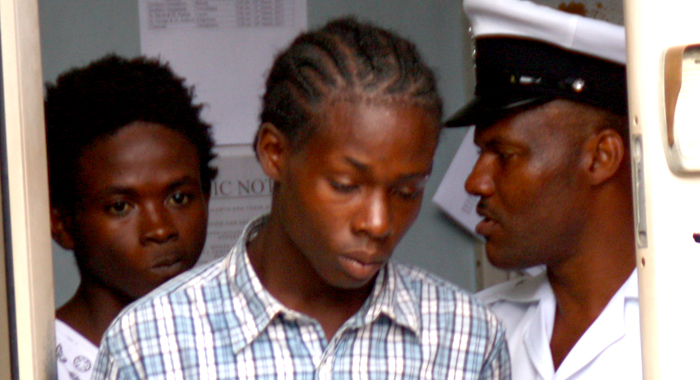 Two youngsters from “Pole Yard”, Arnos Vale, are scheduled to reappear before the Serious Offences Court on March 20, when it is expected a date will be set for the start of preliminary inquiries into an aggravated burglary at the apartment of two medical students from the United States.

Nineteen-year-old Osborne Roberts-Rogers and 17-year-old Atibon Campbell were not required to plea to the indictable charge when they appeared before the Kingstown Magistrate Court on Monday.

The two teenagers allegedly entered Room #6 of Rick’s Apartments at Cane Hall as trespassers on March 1, 2017, and stole a number of items including an iPhone valued US$860, a laptop valued US$600, a cell phone valued US$715, and a Beats wireless headphone and charger valued US$120, a gold watch valued US$200, a jug of milk, a stainless steel knife and 2 dozen eggs.

The stolen items are estimated to cost just over EC$8,200.

Rogers is also charged separately with entering the dwelling house of Danielle Wyllie at Fountain as a trespasser on March 1, 2017, and stealing a stainless steel knife valued $10, the property of the said Danielle Wyllie.

He pleaded not guilty to that summary charge.

The prosecutor, police constable Shamrock Pierre, objected strongly to bail for the two accused on the grounds that police were still recovering items and that there were two other suspects at large. He argued that it was feared that if released on bail they would interfere with the investigations.

The prosecutor requested a two-week adjournment for police to complete their investigations. .

The prosecutor asked presiding magistrate, Bertie Pompey to transfer the joint charge to the Serious Offences Court and Rogers’ separate charge to the Calliaqua Magistrate Court.

The magistrate granted the request and remanded the two youngsters. He informed them of their right to apply to the High Court for bail.

Rogers was ordered to appear before the Calliaqua Magistrate Court on March 27.

One reply on “US medical students’ apartment burglarised”