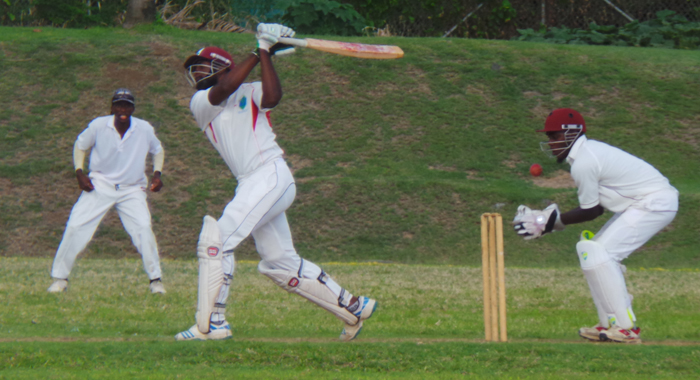 Victors 1’s Miles Bascombe in a vain attempt to hit his way out of trouble.

Victors 1 narrowly escaped humiliation just one week after winning the NLA Neil Williams T20 tournament when they eked out an 11-run win over Carl Joseph Law Chambers ASCO at Arnos Vale 2 on Sunday.

Victors 1 were indebted to their bowlers and some listless cricket by their opponents to get over the line in what was a nail-biting encounter.

Carl Joseph Law Chambers ASCO were given a gettable target in good conditions and looked to be on course to create an upset victory at 60/3. However, once again, their unbridled impetuousness and seeming irrational approach saw them conjure up another defeat.

Captain Deron Greaves, who got a golden duck in the first innings, looked to be leading his team to a memorable win by taking the attack to the bowling as he gathered 27 from 25 balls with five fours. But when he hit a catch to Shaquille Browne off Miles Bascombe at 44/3, it was not just a wicket, it proved to be a confidence-sapping blow to the ASCO cause.

The equation of another 60 runs from plenty of overs with 7 wickets in hand should have still favoured the batting team and it did but only so far as the remaining batsmen were able to keep their nerves. Sadly they failed to do that and got out while still trying to determine, what was the best game –plan to achieve victory.

Browne (4/34) it was whose pace and accuracy kept the batsmen on a leash and having to fight for every run. But even so they still edged closer to the target much to the dismay of an agitated Victors 1 manager Venold Coombs.

In the end, with one player unable to bat, ASCO, as an indication as what may be described as their seeming rudderless voyage, saw two of their last 3 wickets going by the run out route to see them fall agonisingly short.

Victors 1, who won the toss and decided to bat on day one, looked to be well placed when Atticus Browne (28) and Kirton Lavia (29) had raised 46 for the first wicket. But an afternoon middle–order slide saw them go from 70/2 to 107/7 as left-arm spinner Andre Hunte 4/23 and seamer Antonio Barker 3/10 made full use of the assistance being offered on a tricky first day pitch. They were eventually dismissed for 134.

Despite the small total, Victors 1 were able to move into the ascendancy by having ASCO 25/5 by the close.

The resumption on Sunday was a different story as the lower order of Cal Joseph Law Chambers ASCO “used the long handle” to good effect with Barker 30* and Andre Hunte 25 returning to inflict more pain with the bat.

In the end, Victors 1 were able to snatch a seven-run lead.

With the first ending in a near dead heat, all eyes turned to the Victors 1 second innings and it wasn’t long before those eyes had raised brows, looks of despair or glee, depending on if you were looking from the field or the pavilion, as Victors 1 found themselves 39/5 in quick time-a lead of 46. And despite recovering somewhat to be 70/6 they were never allowed to stretch the lead to be comfortable with Lauron Francois 22 and Shaquille Browne 21cobtributing vital runs. Konard Adams 3/20, Deron Greaves 2/6 and Kenson Dalzell 2/17 led the ASCO Bowling and left their team with a great shot at a win which they allowed to slip from their grasp.

Barker, who finished with 1/15 in Victors 1 second innings, was called by square-leg umpire, Colbert McDonald, for “throwing”.