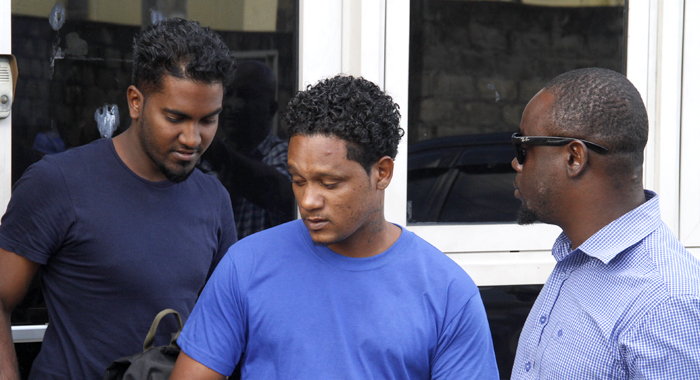 Police have charged two St. Lucian men with illegal entry into St. Vincent and the Grenadines.

The two, Aaron Kadoo, 30, and Mario Chitolie, 25, are also said to be assisting police with their investigation into an alleged automatic teller machine (ATM) scam in St. Vincent and the Grenadines over the past few days.

When they appeared before Bertie Pompey at the Kingstown Magistrate’s court on Wednesday, both men pleaded not guilty to a charge that on March 10, 2017, they entered the state by boat and disembarked without the consent of an immigration officer.

Aaron is also charged that on March 10, 2017, being a prohibited immigrant, he entered the state without a passport, at Barrouallie — a fishing town on the St. Vincent’s east coast. He pleaded not guilty to the charge.

Prosecutor Shamrock Pierre objected to their bail, telling the court that police are investigating a series of offences and the men are persons of interest in those investigations.

He said the Crown was asking for two weeks to allow detectives to complete their investigations, adding that after this period, another application may be made.

Pompey remanded the men into custody.

The men were arrested as police conducted an investigation into an ATM scam in which some EC$70,000 was stolen from the accounts of depositors of one bank, sources have told iWitness News.

The charges against Harry are said to have resulted from the police investigation.

The charges have been laid indictable under Section 209(1) of the Criminal Code and Harry has been denied bail, and was remanded to prison until April 20, 2017 for the commencement of a preliminary inquiry.

Police say their investigation into the ATM scam continues.

On Monday, Bank of St. Vincent & the Grenadines Ltd. (BOSVG), of which the St. Lucia based East Caribbean Financial Holding Company owns 51 percent, said it is aware of recent reports regarding fraudulent activities at ATMs, which it said may have affected some of its customers.

BOSVG did not refer to the police investigation in its statement but said that the incidences “are not limited to any particular bank and are likely to have affected various institutions”.

The bank said it takes matters of customer safety and security very seriously, “and remains unwavering in our commitment to safeguarding the financial affairs of our valued customers.

“The Bank continues to implement technological solutions to mitigate instances of fraudulent activity.

“In light of these reports, customers are therefore urged to continue to be vigilant when using ATMs,” the bank said, and reminded customers of ways of protecting themselves from scams while using ATMs.