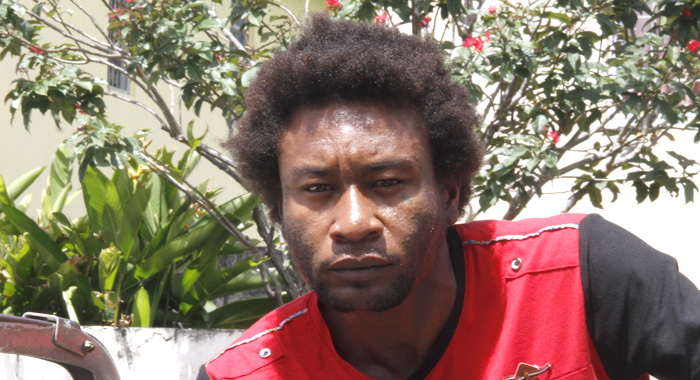 Damarney Gordon has been jailed for burning down his ex-girlfriend’s house. (iWN photo)

A Canouan man will have Her Majesty’s Prisons as his address for the next two years while his ex-girlfriend remains homeless after he torched her wooden house on March 10.

Damarney Gordon pleaded guilty to an arson charge when he appeared before Bertie Pompey at the Kingstown Magistrate’s Court on Friday.

He was charged that on March 10, 2017, he destroyed a 14’x9’ wooden house, the property of Abigail Franklyn of Canouan.

The court heard that Gordon and Franklyn had a common-law relationship for just over a year.

After the relationship ended, the defendant was in the habit of interfering with the virtual complainant, who, on several occasions, went to the Canouan police station and asked officers there to warn Gordon against interfering with her.

On the day in question, Gordon left Balance Village, Canouan for Rumereny Village, where his ex-girlfriend lives.

Before he went to Franklyn’s house, Gordon told a resident of the island that he was going to burn down his ex-girlfriend’s house.

When Gordon got to the house, Franklyn was not at home and he lit the mattress with a cigarette lighter and left for his house.

The fire destroyed the house and its contents, a total value of EC$8,760.

Prosecutor Shamrock Pierre told the court that while Gordon had no antecedents, his action on that day showed that he had no remorse.

“The relationship ended and he failed to move on,” Pierre said, adding that as a result, Gordon destroyed Franklyn’s house.

Pierre requested a custodial sentence, adding that this would give Gordon time to reflect on the seriousness of his action.

Gordon told the court that for two years Franklyn had said that the relationship had ended but that was not the case.

He said the relationship continued in secret and she would often ask him for food and money.

He said that his action resulted from frustration.

The magistrate told the defendant that he was not sure that he could make sense of what he was saying.

“I was the one who fixed it up and made it into a home,” Gordon told the court.

“And what it was before?” the magistrate responded.

Gordon said the house was leaking.

But the magistrate noted that an offence in which a person destroys a house by fire should be tried as arson.

He further said that the penalty for arson is up to life imprisonment if a person is convicted of an indictable charge.

“I don’t have that authority to give you life,” the magistrate said, adding that he has taken into account the defendant’s early guilty plea.

“I give you credit for that, but this is a very serious offence. Destroying a man’s castle and its contents, you’re putting him right back to square one. She has to start all over again,” the magistrate said before handing down the two-year prison term.

“And that is overly lenient,” he added, before ordering the defendant to stand down.