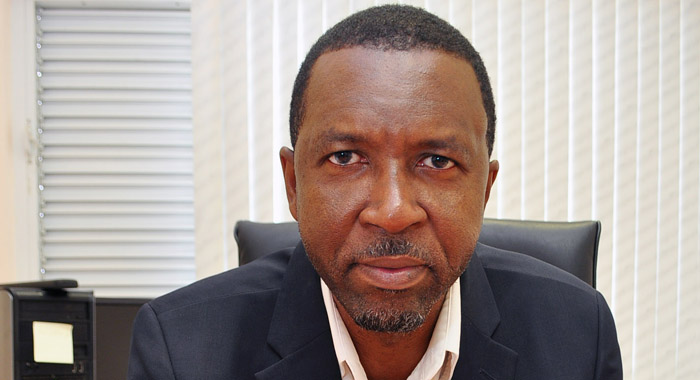 Former Director of the St. Vincent and the Grenadines Community College (SVGCC), Vincentian Dr. Joel Warrican was recently promoted to the rank of professor within the Open Campus with retroactive effect from Jan. 21, 2016, the University of the West Indies (UWI) has announced.

An excerpt from the External Assessors’ reports for the recently appointed professor says “Dr. Warrican is an established leader in teacher education, with several chapters in leading handbooks on literacy education…his exemplary research serves as a model for teacher education and literacy and for action research methods,” the university said in a press release.

As the current Director of the Academic Programming and Delivery (APAD) Division, Warrican holds primary responsibility for the processes involved in academic programme planning, development and delivery of all the online and blended programmes and courses offered through the Open Campus.

He is charged also with the critical function of managing all faculty-related aspects of the campus, as well as working with the undergraduate and graduate Academic Boards of the University to ensure the rigorous review of all academic offerings from the open campus. He and his team within APAD also assist the Quality Assurance Office of the University with promoting and maintaining the accreditation of the Campus.

Warrican is a trained teacher who holds a doctorate in education and a master’s degree in educational research from the University of Cambridge, as well as a bachelor’s degree in language arts education from UWI. He has over 30 years of direct teaching experience at the primary, secondary and tertiary levels across the Caribbean region since 1984.

Previously, he worked at the H. Lavity Stoutt Community College (BVI) as a principal lecturer and Head of the Teacher Education Division from 2002 to 2004.

Professor Warrican has been a member of The University of the West Indies since 2004, with his first appointment as administrator and principal teacher educator with the Centre of Excellence for Teacher Education (CETT), a project that was jointly administered by the Schools of Education at the Mona and Cave Hill campuses.

In 2013, Warrican moved to the Open Campus and was appointed as a Planning and Development Officer in the Office of the Principal. In 2014, he was promoted his current position as the Director, Academic Programming and Delivery.

Warrican has served on the CARICOM Task Force on Teaching and Teacher Education that was working to produce standards for teaching and teacher education in the region. He has also been recently appointed as a Member of the Caribbean Community (CARICOM) Secretariat’s Technical Working Groups (TWGs) for Open and Distance Learning. This voluntary position is a part of the role and functions of the CARICOM Commission on Human Resource Development. In 2015, Professor Warrican attended the Commonwealth People’s Forum in Malta, where he spoke on Transformative Education for Sustainable Development in Small States, and was selected to present the message from Civil Society on the need for transformative education to policymakers and later to the Ministers of Foreign Affairs assembled there.

Warrican has to his credit a notable body of scholarly work. He has authored six books/monographs (three single-authored and three co-authored) and was guest editor for a special edition of the Journal of Eastern Caribbean Studies. Among his most noted publications in the region are the books “Strategies for the teaching of reading and writing: A practical guide for teachers of Caribbean children”n published by the Joint Board of Teacher Education Foundation; “Research methods for inexperienced researchers: Guidelines for investigating the social world”, published by Ian Randle and revised in 2015; and “The Complete Caribbean Teacher: Literacy”, published by Pearson International. This latter publication sold over 2,000 copies.

In addition, he has published a number of individual and joint articles in refereed journals, including the prestigious Journal of Curriculum Studies (“Action research: A viable option for change”, 2006). His most recent article is a co-authored paper titled “Linguistic and cultural appropriations of an immigrant multilingual literacy teacher educator” in the journal Studying Teacher Education. He has also produced, individually and joint, several chapters in refereed edited books and handbooks. He is currently working on a major regional research project on factors that affect student achievement in the region, commissioned by the Caribbean Examinations Council and on a publication titled Acts of Survival: Combatting Educational Threats to the Sustainable Development of Small States in the Caribbean.

Warrican has engaged in scholarly research as a consultant and has produced technical reports commissioned by regional governments and organizations such as the OAS, UNESCO, CIDA and USAID. His service to the University and to the region is also extensive and includes serving on several committees within the institution, to the Government of St. Vincent and the Grenadines, and the Commonwealth of Learning (COL). Professor Warrican serves as the COL Chair (Open & Distance Learning) for The UWI. He now holds the title of Professor of Education (Language, Literacy and Cross-Linguistic Studies).