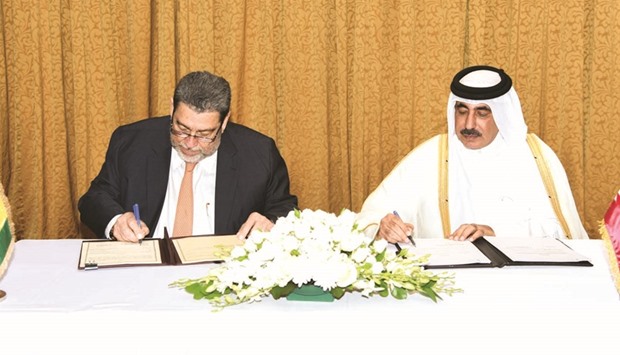 Prime Minister Ralph Gonsalves has signed three agreements with Qatar, where he is on an official visit, which began March 18.

On Monday, Gonsalves signed a cooperation agreement in the legal field, an agreement to establish diplomatic relations and an air services agreement, the state-owned agency for Public Information in Kingstown said.

The air transport agreement comes as part of Qatar’s Ministry of Transport and Communications’ ongoing efforts to hold more talks with world countries aiming to connect Qatar with more air service agreements, thus opening the gateway to the national carrier to fly to more destinations around the world, the API said.

Gonsalves and the Qatari Minister of Transport and Communications, Jassim Saif Ahmed Al Sulaiti signed the air services agreement, while the cooperation in legal field agreement was signed by the prime minister and the minister of justice.

Gonsalves and his delegation also met with the Qatari prime minister on Tuesday to discuss a range of matters of mutual interest, including investments, technical cooperation and aviation services.

The delegation is expected to return to St. Vincent on Friday.

One reply on “Gonsalves signs agreements with Qatar”