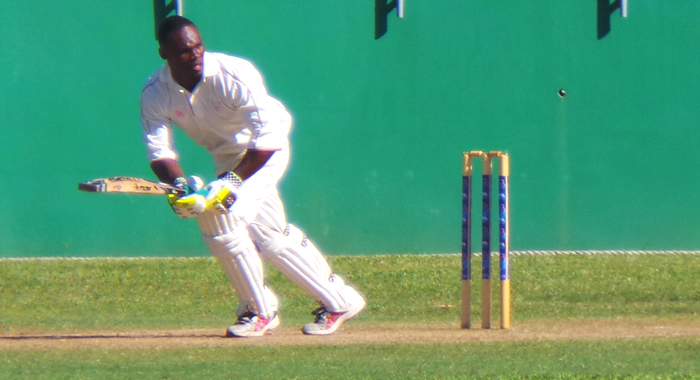 It was the second such results from last year’s dethroned champions after also beating Guardian General Saints in similar fashion two weeks ago.

Carl Joseph Law Chambers ASCO got off to a winning start by calling correctly at the toss but despite another sound innings from captain Deron Greaves they were overwhelmed by Hooper (9/51) with his left-arm spin.

The bamboozling effect that Hooper had on the ASCO batsmen was underlined by him bowling four batsmen and having one stumped in the first innings.

Greaves, who opened the innings as was the case over the last two years, was again the top ASCO batter with an innings of 82, which included 11 fours and 1 six. He featured in a 91 run sixth wicket partnership with Nimron Daniel-rescuing the team from 59/5- before being bowled by veteran legspinner Orlanzo Jackson (1/42). The innings quickly folded with Daniel (46) hitting a return catch to Hooper at 161/9 and the last wicket 8 runs later.

Team Rivals in reply lost the wicket of Hooper (4) in the second over bowled by Konard Adams with the total on ten. Shallow (43) and Dillon Douglas (17) then saw it to the close at 67/1.

On day two, with Camond Walters reportedly missing the match owing to family matters, Shallow took up station at centre stage with another innings of the highest calibre. Offering a sound defence and flashing blade in a fraction of an inch the former Windward Islands stroke-maker gave a telling lesson to bowlers who appeared willing to be part of the “Hyron Shallow batting ethos”. His face bearing the look of a hunter who had cornered his prey, Shallow with quicksilver movement pounced on the short or overpitched delivery to dispatch it to the fence on either side -in between skipping down the pitch to loft the ball over the boundary. He batted his way to 136 off 124 balls with 16 fours and four sixes before holding out to make the total 234/6. Along the way he forged partnerships of 80 with Douglas (32), 43 with Kuthberth Springer (28) and 81 with Rasheed Fredericks (24) in allowing his team to declare 263/7 off 41.3 overs.

Batting a second time with a deficit of 94, ASCO who had come close to beating Victors ONE in their opening match were not up to the fight and after losing Greaves (35) at 43/1 they always looked to be headed for a big defeat, which came just before tea by an innings and three runs.