Survey told ULP how many votes to ‘thief’ — Baptiste 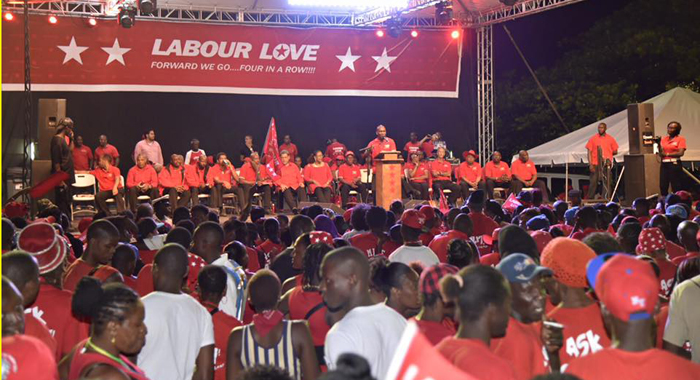 The ULP won the 2015 elections by taking eight of the 15 seats. (Photo: Vote ULP/Facebook)

One of the candidates in the December 2015 general election who has filed a petition challenging the results of the vote is alleging that the ruling Unity Labour Party used a survey to determine how many votes to steal in the election.

The Court of Appeal ordered last month that the petitions — which were thrown out of court last June as improperly filed — be reinstated and heard by a different judge.

The NDP, citing electoral irregularities, is asking the court to declare the party winner of the North Windward and Central Leeward seats or order fresh elections in the two constituencies.

The ULP won the election and a fourth consecutive term in office by taking eight of the 15 parliamentary seats.

Baptiste told the town hall meeting that after the Court of Appeal ruling, one of his ULP friends told him that the ULP has been “stealing the elections a long time”.

Baptiste said the ULP supporter pointed him to an Oct. 22, 2015 iWitness News story that reported on a poll the results of which the ULP said was for internal consumption.

However, Peter Wickham, who conducted the poll, said separately that the election was too close to call.

Wickham said that for the ULP to win the 2015 election, it needed a 2 per cent turnaround in Central Leeward and North Windward.

Baptiste said he and the NDP’s Central Leeward candidate, Ben Exeter lost by almost the same amount of votes.

He further said that, currently, all registration in North Windward is being done in Langley Park or Sandy Bay.

He said he would be coming to the constituency with a bus to take persons from Fancy, Owia, Dickson and other areas to the registration centres.

“And one thing I want you people in Langley Park and Sandy Bay to look out for: no old people is supposed to be 18. The people who are supposed to be registering now are young people who now turn 18. When a man turns 50 and he wants to transfer from South Central Windward to come over into North Windward to pad up the numbers over here, these are the kinds of things that we have to start looking out for,” said Baptiste.