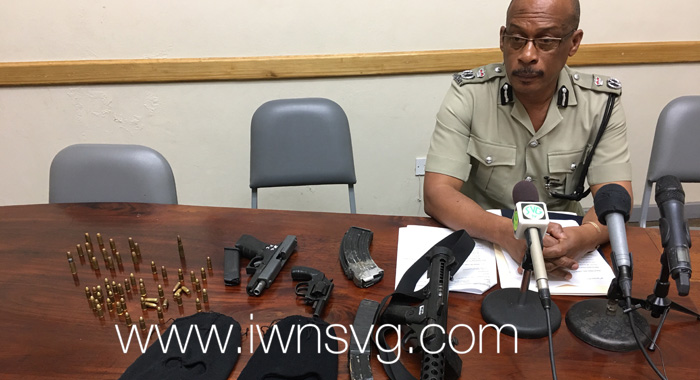 The defence in the Lowmans Hill gun and ammunition cache case has hinted that it will have its own firearms expert examine the weapons at the centre of the case in which Randy Shallow and Freikesha Douglas, are being tried on several counts of gun and ammunition possession.

On Monday, defence counsel, Grant Connell, asked for an adjournment before presenting his case after Chief Magistrate Rechanne Browne-Matthias rejected his submission that his clients had no case to answer.

Shallow and Douglas, a common-law couple, are being tried for possession of three firearms, including a submachine gun (SMG), three magazines, and a number of rounds of ammunitions.

Police are alleging that the items were recovered from the couple’s Lowmans Bay home during a Jan. 18, 2017 raid.

On Monday, as the prosecution’s case came to a close, Connell told the court that he was making an application for the court to witness the police expert, Sergeant Julian Cain, discharge the firearms.

Prosecutor Adolphus Delplesche raised questions about how such a demonstration would be facilitated and asked who would provide the ammunition.

He further asked where would the demonstration take place.

The prosecutor questioned whether a demonstration was needed, saying he did not think one was germane to the case.

The magistrate ruled in favour of the prosecution, saying that the defence had a chance and did vigorously cross-examine the police expert when he gave evidence.

In making his no case submission, Connell argued that there were no charges against his clients for two of the magazines presented as evidence.

He further said the three police officers involved in the raid had given different accounts of what took place at the house of the accused.

The defence counsel further pointed out to the court that the police said that the weapons and ammunition were found outside of a window.

“The question for the court. When the window is closed, as is the evidence of Corporal King, who has access to what is outside?” Connell said.

He said that even if the court were to look at the case from the point of view of constructive possession, it would be a stretch of the imagination to prove who put the weapons and ammunition where police say they were found.

Connell said the second hurdle that the prosecution must get over was the press conference at which Commissioner of Police Renold Hadaway displayed the exhibits.

Connell said that the police chief told the court that he met the investigator, detective Constable Philbert Chambers, outside the police conference room where Chambers removed the evidence tags to as to not prejudice the defendant.

“That was the first breach in the chain [of custody],” Connell argued.

He further said that the firearms expert — who had initially given the model number of the SMG as the serial number — said that he realised his error while lying on his bed.

Connell further noted that the expert had said that after examining the weapons, he had never seen them again until they were displayed in court.

However, the Commissioner of Police told the court that the firearms expert met him at police headquarters with the firearm before a court hearing in the case.

He further said that while the police say that there is no serial number on the Glock 9mm pistol found in the raid, the serial number is very clear, if the weapon is viewed with a magnifying glass.

Connell further argued that there is no such a weapon as a “Glock 9”.

He said that of the 13 exhibits before the court, the defence has issues with seven of them, adding that it would be a travesty of justice to make the accused persons answer to the charges.

“It is not the first time a defence counsel has used that line. But this time, it is well warranted. This time, I am justified in saying it, because this does not send a good signal…

“You do not compromise the integrity of exhibits because it would lead to compromising justice,” he said.

“This is not a case. This is police confusion. It is a manifestation of where we are, where the Police Force is. Too many square pegs in round holes, too many rise to ranks because of political wind under their wings and they don’t know their (silence) from their elbow,” Connell said.

But in his response, Delplesche said that the defence counsel had jumped across legal theories quarter way through his submission.

The senior prosecutor said that issues of discrepancy and credibility are for the jury and noted that in the instant case, the jury is the magistrate.

“The question is, were the exhibits found at the defendants’ house? The evidence, so far, is yes,” Delplesche said.

Delplesche further pointed out that the exhibits were taken away by police, marked, examined by an expert, proved to be functional, as it relates to the firearms, and the ammunition were proved to be live.

In response to Connell’s point that the police had amended the serial number of the SMG, Delplesche noted that the Criminal Prosecutor Code allows for any part of a charge to be amended before the prosecution closes its case.

Delplesche argued that even from the perspective of circumstantial evidence, the defendants have a case to answer.

He noted that while they live in rented accommodation, they have lived there for four years and the police found the items on a ledge on their window, having gained access to the house some 15 minutes after they began knocking.

“Police knocking on your door for 15 minutes and you’re not answering. What’s the inference? Was it during that time that you put them there (on the window ledge)?”

The persecutor said the expression “travesty of justice” was overused by the defence.

“It is no travesty of justice [if the accused are made to answer the case]. It may be the other way around. Based on the evidence, a prima facie case is made out and the defendants ought to be put on their defence,” Delplesche said.

In giving her ruling, the magistrate said that whether a prima facie case is made out, she notes that the charge is for possession.

“And, having considered the evidence and the circumstances in which they were supposedly found, there is definitely a prima facie case,” she said.

At that point, Connell asked for an adjournment, saying that he would resubmit a request for certain documents from the police and would embark on getting a firearms expert.

The next hearing in the matter will be on April 24.