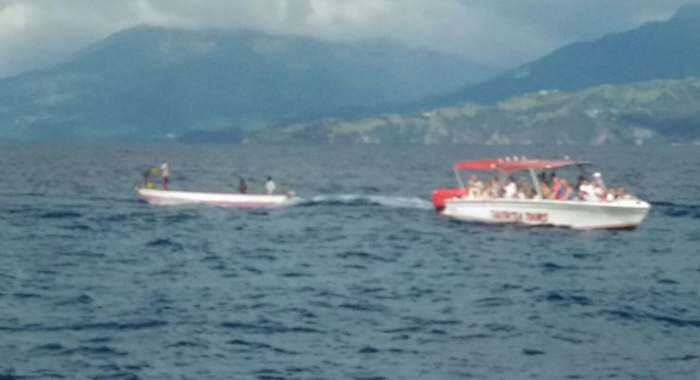 The government of St. Vincent and the Grenadines (SVG) says it is in the process of determining what legal avenue would allow it to outlaw as quickly as possible the killing of orcas and bottlenose dolphins in the nation’s waters.

Prime Minister Ralph Gonsalves further told Parliament on Thursday that the nation must reconsider its International Whaling Commission quota of four humpback whales annually and whether it should be reduced.

His announcements came as Thomson Cruises moved from just cancelling whale watching tours in SVG to cancelling its last call to the destination his season after two orcas (“killer whales”) were killed in front of some of its guests on St. Vincent’s west coast one week earlier.

The two orcas were among a pod of four that were being watched by 40 passengers from TUI Discovery who were on a whale and dolphin watch tour operated by a local tour company, Fantasea Tours.

While the visitors were enjoying the spectacle of the dolphins, which are resident but not often seen in Vincentian waters, three fishermen from the whaling town of Barrouallie killed two of orcas, using a harpoon gun.

The incident has triggered an outcry from some sections of the local population but the fallout internationally has been significant, with many social media users calling for a boycott of SVG as a destination.

Gonsalves had announced on Tuesday that his government would introduce legislation to outlaw the killing of orcas, in keeping with the nation’s international obligations.

Speaking in Parliament on Thursday, he told lawmakers and media audiences of the impact on the destination of the cruise line’s decision.

“Now, I just want everybody to realise — look, we have the head tax of these 1,800 people, the money for the cruise ship pier — because we have to pay the debt for the cruise ship pier, the people who buy their vehicle to take the tourist all about on … land tours, money at the Botanical Gardens, propagating the good will of the people, the sea tours.

“All of the money, which is the actual money which would be collected on a cruise throughout the economy would certainly be over a quarter million dollars,” said Gonsalves, who is also Minister of Finance.

The prime minister said a lot of residents of Barrouallie, the town where the whalers live, are upset that the orcas were killed at all, and not just because they were killed in the presence of tourists.

He said the week before the orcas were killed, six pilot whales — the cetacean normally killed as part of the “black fish” industry in Barrouallie — were caught, making the killing of the orca totally unnecessary.

“Now, we cannot allow this thing to continue. So yesterday, the Cabinet took a decision in line with our international obligations to ban the killing of orcas and the ‘flipper’ (bottlenose dolphin),” Gonsalves said.

He said the black fish industry could cotinine to harvest short-finned pilot whales and a particular species of porpoise.

The Attorney General will examine whether the law can be brought through a statutory rule and order passed by the Cabinet or whether a bill must be brought to Parliament for debate when it next meets on May 18, to outlaw the killing of orcas and bottlenose dolphins, Gonsalves said.

Gonsalves, who is also Minister of Legal Affairs, said he has to speak in Parliament about his government’s decision so that all concerned will know that the government has responded promptly.

He said he has been involved in opposition politics and know that it would be tempting to say that the government is trying to kill the black fish industry.

He, however, said that is not the case, adding that there is a project under the Basic Need Trust Fund this year for a black fish processing facility in Barrouallie.

“And we want this facility to be a modern hygienic facility to process the black fish,” Gonsalves said, adding that by “black fish” he means short-finned pilot whales.

Gonsalves said that persons who do not know about the matter can call the director of fisheries to get more information and he further offered to organise a briefing by the minister for opposition lawmakers.

“While we do things traditionally, we are in a modern world and we have to look at the totality of all our economic circumstances,” he said, adding that SVG is not a country unto itself but part of the regional and international community.

“And we have these treaty obligations which we have to fulfil,” said Gonsalves, who had earlier noted that SVG signed onto the treaty banning the killing of orcas and bottlenose dolphins, but did not pass the relevant law.

The IWC allows SVG to kill four humpback whales every year as part of the nation’s whaling tradition, which began in 1875.

That quota is up for review next year, and Gonsalves said that the nation needs to ask itself about whether the quota, which was increased from two to four, should be reduced to one or two.

He added that since 2001, the nation has not caught more than three whales in any year, and added that a lot of people might not understand what happened when a baby whale is killed.

The prime minister said that these cetaceans are familial and when a baby is killed the adults come by, making them “metaphorical sitting ducks” for whalers.

Gonsalves said a few years ago, when a baby humpback was killed, the mother came by “with a vengeance” and he was told that the whalers had to get out of the way and the mother of the calf “bawled like a cattle — again to mix my metaphor — for about 24 hours in the waters”.

“These are intelligent social mammals,” Gonsalves said, adding that SVG has certain international frameworks in which it operates.

Some conservationists have accused SVG of being a pawn for Japan at the IWC. Japan has built a number of fisheries projects in SVG, which some persons say are payback for the support it receives from SVG at the IWC.

Gonsalves, however, said it is not true that SVG takes the position of Japan on an on-going basis on the IWC. He said that when he came to office in 2001, he removed the paid advisor to the SVG delegation, which was financed by another entity outside of the country.

He said the philosophy of his government is that members of a club must pay their subscription themselves so as to protect themselves from any spurious charge.

Gonsalves reiterated his view that whales are the second most “political animals”, after homo sapiens and responsibility for political animals should be the Office of the Prime Minister.

He had first made this point after moving ministerial responsibilities fro whaling from the Minister of Fisheries.

The prime minister assured residents of Barrouallie that his government is there to protect them and their black fish industry in the harvesting of short-finned pilot whales and the limited species of porpoise that are permitted.