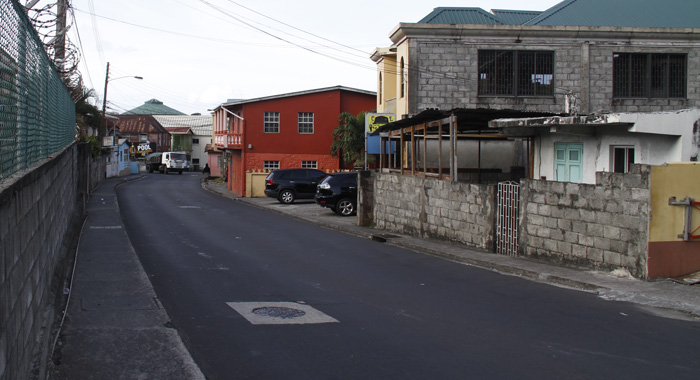 The drains leads to the Milton Cato Memorial Hospital, at the end of the street. (iWN photo)

The drain that would have taken waste water across the Victoria Park to help reduce the chances of flooding of the Milton Cato Memorial Hospital will not be built.

Minister of Works, Sen. Julian Francis informed Parliament on Thursday that the drain has been excised from the project, but said other measures have been put in place to reduce the chances of flooding of the nation’s main healthcare facility.

Francis gave the information in response to a question from opposition lawmaker, Member of Parliament for West Kingstown, Daniel Cummings.

Cummings asked the minister to say if the work to divert drainage water from flooding the Milton Cato Memorial Hospital by rerouting same round Victoria Park and into the North River had been excised from the South Leeward Highway project.

The opposition lawmaker also wanted Francis to give the House of Parliament the assurance that flooding of the MCMH will not occur again by this inaction.

“Considering climate change, Mr. Speaker, I am not going to give any assurances of non-flooding. I have seen places that don’t get flooded get flooded,” Francis said.

He told Parliament that an additional review of the catchment was conducted by the consultant and new drainage release points were identified, such as through the cemetery and the new Central Water and Sewerage Authority (CWSA) soil draining

“In other words they have changed the drain from going around there,” Francis said, adding that the previously designed drain was incompatible with the CWSA design project.

“The possible difficulties associated with navigating and avoiding existing armouring cable. And alternative underground was then conceptualised,” Francis said.

He said that drain would have started near the intersection of the Leeward Highway and Cyrus Street, through the City Car Park, around the top end of Victoria Park, emptying into North River.

“The drain has not yet been constructed,” Francis said, telling Parliament that the consultant for the project has introduced several measures that have been designed to reduce significantly the volume of water reaching the Milton Cato Memorial Hospital, even in the event of high rainfall.

“So much so that they consider the alternative drain to be unnecessary or redundant. So, basically, they want to change it but still, the consultant, in his review, is saying it is unnecessary to build this drain going across there.”

Francis, however, said his ministry has issued a letter through the consultant to the contractor, advising official omission of the work.

The letter said the drain is to be replaced by localised drainage improvement work at the north entry of the MCMH (near Daddy’s Shop), drainage improvement at the north entry gate area of the Kingstown Cemetery (From Nutricia Centre), and a culvert across the South Leeward Highway at Cyrus Street continuing eastward across the City Car Park in a storm drainage pipe to outfall at the North River; culvert rehabilitation and modification works at the Imani Pre-School area.

He said he has told the ministry that he wants the drain at the top entrance of the Botanical Gardens, the one at Russell’s and also at Cyrus Street be opened up and rebuilt.

“Those are old drains and easy to get clogged,” he said, adding that the drain at Walker Piece is always blocked.

“So I am insisting that all those intersections be broken and rebuilt.”