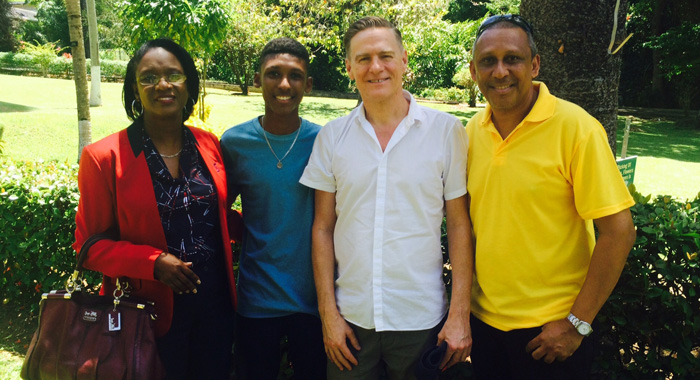 Saeed Bowman, 2nd left, pose with his parents, Roland and Lesley Bowman and Byran Adams, 2nd from right, of the SVG Preservation Fund.

The Diana Award is a charity legacy to Diana, Princess of Wales’ belief that young people have the power to change the world.

Bowman was nominated because he has been transforming lives through the powerful medium of his musical talent as a steel pan player since the tender age of 7.

“Saeed has been using his talent at playing the steel pan to bring hope to the disadvantaged, to shine light on previously unseen problems, and to simply bring joy to disadvantaged children and youth by lighting up their lives with music. When Saeed is called upon to perform at a charity event, he shows up, he dazzles, he inspires and leaves everyone feeling better than when they arrived — and in the mood to be generous!” a press release said.

The statement added: “Saeed has been the champion of simply doing good through music, because the causes that he has played for are as diverse as his musical ability, being both a pan and a piano player. From children in foster care to critically ill children on the pediatric ward Saeed has used the pan to fundraise for them and to lift the spirits of his audience with his music.

“Saeed’s music enabled many charities to raise funds and so directly benefit the afflicted, and also contributed to the renaissance of this traditional art form as his mastery of the pan inspired many young persons to take up the steel pan as an instrument of choice.”

Bowman is the son of Lesley Howard-Bowman and Roland “Rolly” Bowman. He is a proud member of the Starlift Steel Orchestra and is absolutely thrilled to receive this international recognition in this special year when Starlift celebrates is 50th anniversary and hopes that the award will add to Starlift’s celebrations.

The Preservation Fund is thrilled to have been able to shine the light on this talented community spirited musician and hope that many other young persons will seek to emulate him by giving to their communities from an early age,” the statement said.