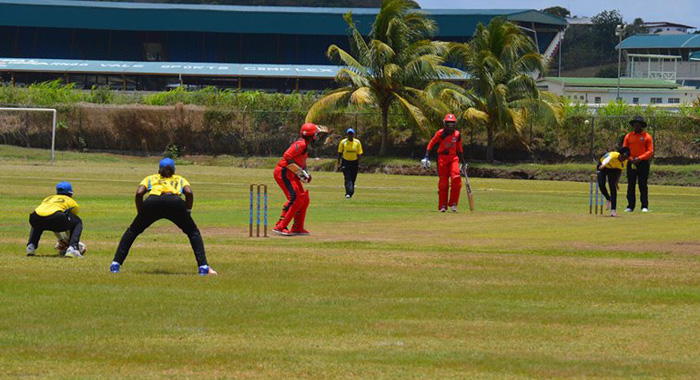 Barbados women gave an early indication of their intention to be serious title contenders in the West Indies Women’s Super50 competition by defeating defending champions Trinidad and Tobago by 6 wickets at the Sion Hill Playing Field on Thursday.

The Barbadians, who boast the mercurial Deandra Dotting and other exciting talents in their lineup, never allowed their good work in the field to go to waste as they confidently wrapped up victory against their experienced opponents.

Set 132 for victory in 46 overs after a delayed start had forced a reduction in overs, the Barbadians overcame some minor hiccups to get home with plenty to spare.

They were led by Kyshona Knight (56) and Dottin (26) who came together after their team had slipped to 2/17 by the seventh over. The pair, mixing defence with aggression, added 65 for the third wicket before being separated.

Dotting, who struck 4 fours off the 53 balls she faced, was bowled and caught by the wily Anisa Mohammed at 82/3. Knight — who struck 4 fours and 2 sixes off the 107 balls she faced — was then LBW by Mohammed to make the total 113/4. However, Charlene Taitt (20*) and Aliya Alleyne (9*) got the required runs for no further loss. Extras contribution was 14 with 11 wides.

Mohammed was the best of the TnT bowlers, finishing with the impressive figures of 10-4-11-2.

Trinidad and Tobago — who were sent into bat earlier — were always forced to do repair jobs after losing key wickets at crucial points during their innings.

It was left to the experienced pair of Britney Cooper (56) and Merissa Aguillleria (25) to see them to what was only a workable total.

Hayley Mathews took 4/24 and Dotting 2/19 to hold the defending champions in check to ensure that their batters would not be too hard-pressed in their pursuit. The Barbadians allowed 13 extras, 10 of which were wides.

The other scheduled match at the Park Hill Playing Field between the Leewards and Jamaica became yet another fixture to be abandoned at that venue without a ball being bowled.