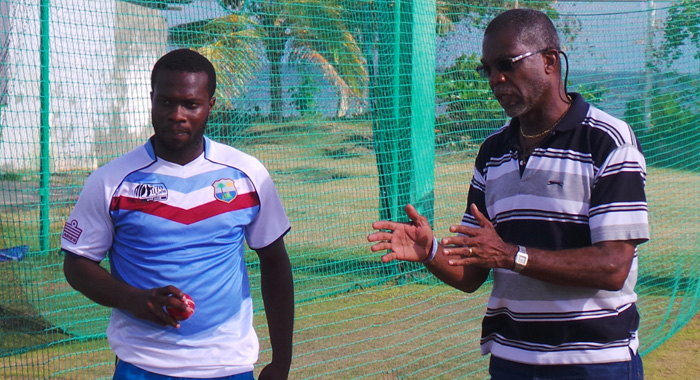 Some of this country’s young fastbowlers were  given some tips and advice in perfecting their skills by one of the greatest in the field last Thursday.

The young pacers were taken through the rudiments of fast-bowling by former West Indies speedster, Michael Holding, who was in St. Vincent and the Grenadines on a short stayover.

In the session which lasted two and a half hours at the Wilf Slack Nets, the knowledgeable and eloquent Jamaican advised the bowlers on how to choose a run-up, the use of the non-bowling arm in the delivery, the follow through, using the seam and positioning of the wrist at the delivery point to get maximum benefit.

“The first thing you have to get right if you have intention to become a fast bowler is a run up that you are comfortable with. You cannot make anyone tell you that your run up is too long or it is too short,” Holding said.

“You are the person who have to travel that path and, therefore, the same as how a plane needs to increase speed to take off, you have to do the same,” the former speedster told his eager students.

He also suggested to the young pace men to practice running without the ball as they try to get a comfortable and suitable run up.

“Just go on the park and do some normal runs a few times then as you get comfortable, start doing a few imaginary deliveries and do that repeatedly until it becomes part of you,” said the man who many have described as having the had the smoothest run.

Holding also pointed out to the pacers the virtue of delivering from a side-on position, which he said presents more of a challenge to “chucking” and presents a better opportunity to swing the ball as against the front-on, which offers an easier chance of “chucking one” and limits the movement of the ball.

He also demonstrated to the bowlers the use of the writs as well as the holding of the seam to exploit movements.

The issue of conventional and reverse swing and how they are effected was addressed by Holding. And he pointed to some of the discussions and arguments he has had over time with some of his colleagues in world cricket including South African great Shaun Pollock about reverse swing in particular.

“Conventional swing comes about when one side of the ball is roughed up and the other side is polished and kept shine. The wind tugs against the rough side and physics will tell you that once this happens the ball will move to where that rough side is, clearly.

“Don’t make them confuse with all this foolishness about how reverse swing comes when you rough up one side of the ball. That is not true. If I take a new ball and take sandpaper and scrub off one side don’t care what you do — and I challenge all of them you hear talking to get that ball to reverse and they wouldn’t dare do it. You know why? Because the ball will only reverse when it has sweat or all the other foolishness they put on it,” said Holding, who took 249 Test wickets in 60 test matches over a 13-year career.

Prior to the commencement of the session, former West Indies pacer Kenroy Peters took the bowlers through a warm up session and at the end of the nest session Holding offered advice on training regiments with and without weights as well as the psychology of dealing with injuries.

He advised the young bowlers to only do a limited amount of actual weight training, adding that each such training session must be done in three sets of 15, ideally spaced out.

He told the players to heed the advice of the specialists in the medical field and to pay close attention to the way they treat their bodies by not rushing back too quickly to play after an injury lay-off.

Holding, who now operates as a cricket commentator, also related personal real life experiences in his career to give the players an idea of what they should do and avoid.

The players, at the end of the session, all expressed their gratitude to the distinguish sportsman, with SVG speedster Shacquille Browne doing an impromptu vote of thanks. Browne was among the youngsters who appeared to have captured the attention of the former West Indies great.

The programme was initiated by this writer, in conjunction with the SVG Cricket Association Inc.