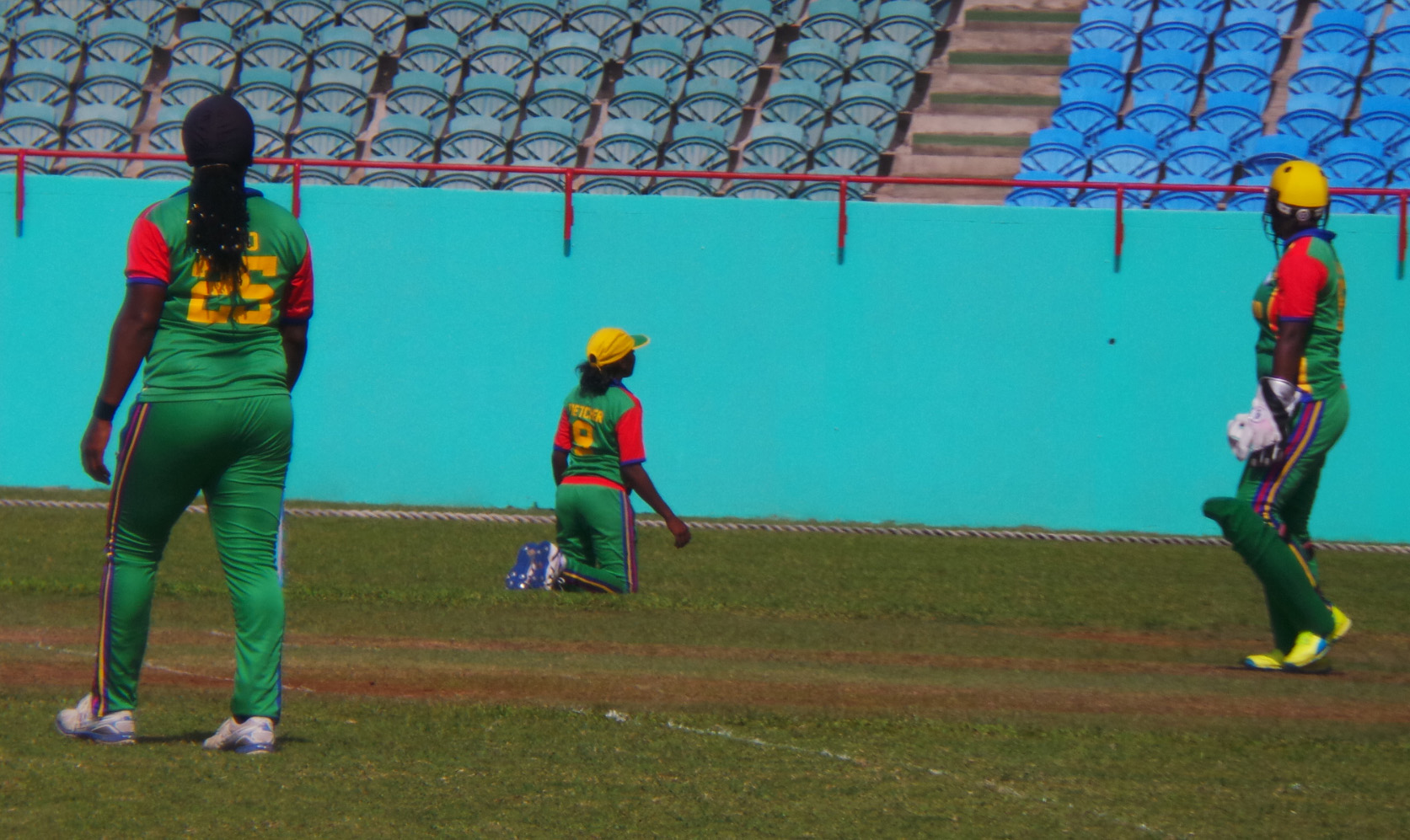 The Windwards have been brought to their knees.

Defending champions Trinidad and Tobago and formed team Barbados will contest the final of the 2017 West Indies Women’s Super50 tournament at the Arnos Vale Sports Complex on Sunday.

The defending champions earned the chance to compete in the final after completing an impressive 8-wicket win over the Windwards in their last preliminary round match played at Arnos Vale on Friday.

Barbados had marched into the final after winning all five matches in the preliminary round.

Trinidad and Tobago earned Friday’s win on the back of an unbeaten half-century by player of the match, Stacy-ann King.

The left-handed King, who came to the wicket with her team on 25/2 in search of 122, was given a slice of luck on five when she was badly missed at midwicket with the total on 33/2.

She quickly put that behind her and, in partnership with Felicia Walters, set sight on the target with intelligent batting-which saw them defending the good balls, while taking every scoring opportunity.

They were also helped by the Windwards’ below par fielding, which saw a number of elementary blunders that resulted in boundaries.

The Windwards’ bowlers for the most part held their own but hamstrung by a small target, they could only hope for poor cricket by their opponents to claim a victory and a place in the final. This never happened as the TnT batters featured in an unbroken 97-run third-wicket partnership which saw their team home off the fifth ball of the 36th over.

King was unbeaten in 59 and Walters 40 as they cut a happy picture smiling happily to be greeted by their teammates and team management.

Earlier, the Windwards, who were leading the standings going into the last two rounds of the competition, were kept on a tight rein by the TnT bowlers and were only able to get up to 121 in 47.2 overs. Once again, the top order failed to produce with only Juliana Nero 25 and Roylin Cooper 20 getting any score of note.

Medium pacer Lee Ann Kirby 3/17, Karishma Ramharack 2/17 and Kamara Ragoobar 2/20 shared the wickets for Trinidad and Tobago who jumped ahead of the Windwards with the victory.

The Windwards, by that loss and the defeat to Barbados on Wednesday, missed out on the final and finished third in the tournament overall.

Looking ahead to the final, King said that her team was confident of avenging the defeat they suffered at the hands of the Barbadians in the tournament’s opening match since they have looked where they went wrong in that match.

“We have gotten better as the tournament has gone on and we know that we can beat Barbados. In that match they employed a lot of short balls and it caught us sort of off guard but we would be ready for that next time around,” King explained.

The victory was powered by another compelling performance by the uncontainable Hayley Mathews who starred at both the bowling and batting crease as she once more showcased her phenomenal talent.

In the Leewards innings of 65 — which they made off 27.2 overs after being asked to bat, Mathews returned figures of 6/16 off 7.2 overs. West Indies Women’s fast bowler Shamilia Connell took 2-12 from 8 overs.

Mathews led the Barbados charge with an innings of 43 with 6 fours and 1 six off 31 balls as he grabbed another player of the match award. Mathews is the tournament’s top runscorer with 149 runs and the third top wicket taker, with13 scalps.

Barbados assistant coach Pedro Collins believes that his team can win the 2017 tournament as they have the best all-round team that is performing at the optimum in most areas. He also sees the first round win against their opponents as being a major psychological advantage.

“We have been playing really good cricket and I do not expect us to fall off at this point and that win in the first match will certainly boost the players’ confidence,” the former West Indies left-arm seamer said after beating the Windwards.

Collins, despite expressing satisfaction with his team’s performance with the bat and ball, was concerned with some areas of their fielding, but saw no reason why the players should not up their game for the final.

The other final round match saw Jamaica, on the back of a tournament high 89 from captain Stafanie Taylor, trouncing Guyana by 112 runs at Park Hill.

Taylor, the West Indies Women’s captain, counted 7 fours and one six from 117 balls innings, as the Jamaicans were dismissed for 188 – the highest total of the tournament — from their allocation of 50 overs.

The innings was built around a 106-run, seventh-wicket stand between Taylor and Tameka Sanford that rescued Jamaica from 66 for six in the 24th over.

The dismissal of Sanford by Subrina Munroe for 31 in the 48th over, the rest of the batting, including Taylor, succumbed for 16 runs in the next two and a half overs.

Medium pacer Chedean Nation then grabbed 3-20 from 8.3 overs and Chinelle Henry took 2-17 from seven overs, as the Guyanese were bowled out for 76 in 30.3 overs-giving Jamaica whose match against the Leewards was rained out their first win of the tournament.