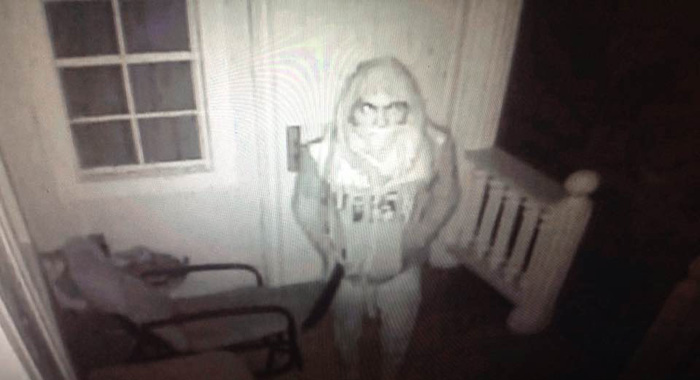 The intruder outside Bacchus-Baptiste’s house.

A prominent lawyer says she was disturbed by the presence of an armed intruder outside her house just before midnight Monday.

Kay Bacchus-Baptiste, however, said she was even more disturbed when he refused to leave even after she turned on the lights.

She told iWitness News that she and her adult son were alerted by the presence of the intruder when he got a “funny feeling”.

“Something just gave him a funny feeling like there was a presence by his window and when he looked, he saw that the guy pulled the window,” Bacchus-Baptiste told iWitness News.

She said they turned on the lights and her son was about to go outside and she stopped him from doing so.

“Which was probably a good thing because I was so certain that if the guy saw the lights he would run. When I looked at the other camera, the guys doubled back and came by my window, even though the light was on and then walked all around by the car, and then he eventually left the yard.”

Bacchus-Baptiste, who lives in Harmony Hall, said that they checked the camera after the incident.

“He had a cutlass in his hand — a sharp cutlass — and a knapsack on his back. He came to all the bedroom windows, walked around.

“But even when we got around and turned off the light, the fellow didn’t run out the yard,” she told iWitness News.

“The fellow went to another location and then came back and actually stayed as long as about eight or 10 minutes in the yard after we turned on the lights, which makes me wonder whether his intention was just to thief (steal) or he wanted to chop somebody or something.”

Bacchus-Browne told iWitness News that she filed a report with the Criminal Investigations Department in Kingstown on Wednesday.

Bacchus-Baptiste said they are unable to recognise the person because he had a bandana over his mouth and a hoodie over his head.

Bacchus-Baptiste said she has a licensed firearm but did not discharge it.

“I probably should have done that. But I was so — like, ‘This is a stupid idiot come to steal and he would run.’ It is only in looking at the cameras after — I think I lapsed, but it won’t happen again. I am more alerted now.”

She said the CID said they would send one of their IT specialists to look at the footage.

Bacchus-Baptiste said it was not the first time that there was such an incident at her home.

“In 2008, right after we filed the rape case, a man came to my house with a cutlass and a jug of gas, walked around the house, etc. I gave the picture, which was much better than this one, to the police. They lost the picture.

“They gave back the jug of gas to a neighbour who is a policeman, who they said it was his jug of gas and nothing ever became of it.”

Bacchus-Baptiste said that in light of the incident she is concerned about her safety.

“I am. I mean, if a man comes to thief, that happens all the time, that’s why I reacted this slowly. I thought, ‘Yeah, the man come to steal.’ But when I reflect on his odd behaviour of not running when the lights came on, what sort of thief would do that? That’s what I find quite odd,” she told iWitness News.