Man jailed who said he found gun while picking breadfruit 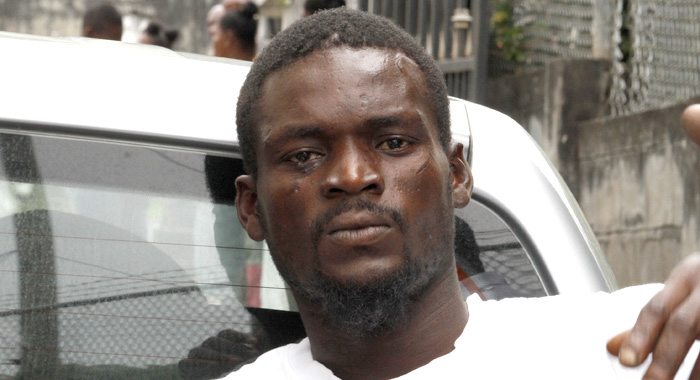 A Vermont man will spend the next four years in prison for possession of a shotgun and two rounds of 12-gauge ammunition.

Chief magistrate Rechanne Browne-Matthias handed down the sentence on Calbert Andrews on Monday, at the end of the proceeding in which she asked the arresting officer if Andrews is known to have a history of mental health issues.

The court heard that on Saturday, May 13, Police Constable Caesar, who is stationed at the Vermont Police Station, received certain information and went to Vermont with other police officers in search of the defendant.

Andrews was met at a shop and the police officers requested a search of his person, to which he consented.

Caesar felt a hard object in the defendant’s right side and when he retrieved it, he saw it to be a firearm.

The search continued and the police officer found two rounds of 12-guage ammunition in the left rear pocket of Andrews’ pants.

Firearm expert Sergeant Julian Cain checked the weapons and ammunition and found the shotgun to be in good working order and the ammunition live.

Checks with the firearms registry showed that Andrews does not have a licence to keep a firearm or ammunition.

Andrews told the court that another friend told him to carry the gun back and he decided to do so.

The magistrate commented: “I don’t know how guns are always placed under mango trees and breadfruit trees in St. Vincent and the Grenadines.”

She was referring, sarcastically, to some of the excuses that persons caught with illegal firearms often give to her court.

She added: “From the time you see it, you should have run to the police station.”

Andrews said, however, that the police would have said that the firearm belongs to him. He said he decided to put the firearm in his waist and the ammunition in his pocket because he did not want to be seen with it.

The magistrate further told the defendant that possession of an illegal firearm is a serious offence, adding that the defendant knows this because he asked for leniency.

She noted that such an offence carries a maximum sentence of seven years in prison, or a fine, or both.

Browne-Matthias further told Andrews that his antecedents are “not pretty”, noting that he was released from prison recently.

She, however, noted that in light of his early guilty plea, he would not get the full seven years.

“Thanks, eh,” the defendant replied.

The magistrate further noted that the defendant was not brandishing the weapon, although she pointed out that a shop is a public place.

The magistrate, however, told the defendant that she has to take on board the fact that firearms cause violence, adding that sometimes the accused persons become victims of the same firearms.

She said that the 25-year-old defendant was still relatively young, adding that a period of rest and reflection could lead to the other “r” — rehabilitation.

Browne-Matthias said that there are several good programmes being taught at the prison, adding that the defendant could learn a skill there that would give him financial independence and a chance to make the best of himself.

She further said that in the sentence, she must send a message to deter others.

The defendant had about 50 cigarette burns on the back of his hand, which he said was self-inflicted. He said he would stub out cigarettes on his hand.

The magistrate asked the arresting officer if the defendant — who denied that he uses cocaine — is known to have a history of mental health issues, and the officer said no.

The magistrate told the defendant that he could have access to a counsellor while in prison if he so desires and advised the man, who did not have a lawyer, that he can appeal his sentence.

“And think about how you can turn this into a positive,” the magistrate said, before ordering Andrews to stand down.