Delegate injured during brawl at UN conference in St. Vincent 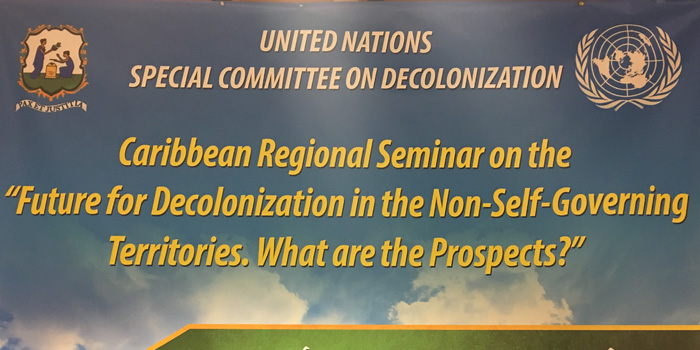 A foreign delegate in the United Nations conference on decolonisation taking place in St. Vincent and the Grenadines was treated in hospital on Thursday, after being struck by another participant.

Patients awaiting medical attention at the emergency room told iWitness News that the man — said to be an African — was taken for X-ray.

They say that he had a bandage on the side of his head.

Another African participant reportedly struck the delegate in the head during a heated exchange on the final day of the three-day conference of the United Nations Special Committee on Decolonisation.

A protocol officer from the Ministry of Foreign Affairs, who accompanied the delegate to the hospital, declined comment as he waited for the delegate outside the Accident and Emergency Department, where the man was being treated.

The altercation is said to have taken place at the National Insurance Services headquarters, where the conference was being held at the eastern end of the capital, Kingstown.

Persons awaiting medical attention at the hospital told iWitness News that the man looked limp as he was wheeled into the emergency room in a wheelchair.

A member of the hospital’s staff told iWitness News around 3:30 p.m. local time that the delegate had been discharged but was yet to leave the healthcare facility. The person offered no further comment about the delegate or his injuries.

The incident took place on the last day of the conference, which began with Prime Minister Ralph Gonsalves noting the importance of dialogue between territories and their colonial powers.

“… the experience has been that in the midst of anti-colonial struggles, at some time, persons have to sit down and talk with one another and resolve this question of decolonisation,” Gonsalves told the opening ceremony on Tuesday.

The 70-year-old leader, however, said he has been around long enough to know that countries and ambassadors get involved in a lot of diplomatic speak.

“It is better to speak sharply to the truth as we understand it than to shoot sharply,” Gonsalves said.

The committee was established in 1961 by the General Assembly with the purpose of monitoring the implementation of the Declaration. The committee annually reviews the list of territories to which the declaration is applicable and makes recommendations as to its implementation.

This week’s meeting was held under the theme “Future for decolonisation in the non-self governing territories. What are the prospects?”